50%
Tweet
Blue Cross Blue Shield of South Carolina is focusing on long-term solutions to the industry's IT talent shortage with programs aimed at high school and college students.

Blue Cross Blue Shield of South Carolina has long been out in front of the IT talent shortage issue that plagues large swaths of the insurance industry. For example, the Columbia, S.C.-based carrier created its first Entry Level Training Program (ELTP) more than 10 years ago. But while ELTPs — educational programs that equip newly hired IT workers with the necessary business and technological acumen needed to contribute — have direct benefits to the company, BCBS of South Carolina (more than 1 million members) will have to demonstrate more patience with its latest programs, which focus on even younger segments of the population that are years away from entering the workforce. 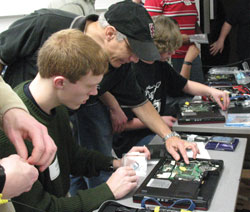 BCBS of South Carolina has evolved its efforts to address the industry's IT talent shortage by targeting students with programs such as its Create IT Computer Camp.
In December 2008 the insurer announced that it has partnered with the University of South Carolina (USC; Columbia) and IBM (Armonk, N.Y.) to create the Consortium for Enterprise Systems Management, which will aim to nurture IT talent and IT management expertise. Around the same time, the carrier also was preparing for its second annual Create IT Computer Camp, an educational event for local high school sophomores and juniors who are interested in IT. BCBS of South Carolina will cohost the camp with USC's College of Hospitality, Retail and Sports Management.

"Our message — not just to young people, but to the community at large — is that right now we have a large number of jobs and very few people available to fill them," BCBS of South Carolina director of staff resource management Lonnie Emard says of the new programs.

Emard and other BCBS of South Carolina executives describe the Consortium for Enterprise Systems Management as an "IT greenhouse" in which the company and its partners will work to grow young talent in industries such as insurance and banking, among others. According to a press release, the consortium will be located on more than 14,000 square feet of space on two floors of the Horizon II building of USC's Innovista research campus.

The ground floor will house a data center provided by IBM, while the second floor will include a boardroom, meeting rooms, classrooms for postgraduate training and multipurpose space for existing programs such as the high school computer camp. As part of the partnership, USC plans to work with middle school and high school teachers to develop the basic skills required for work in IT.

As of press time the carrier was also set to hold its Create IT Computer Camp for 20 high school students from nearby Richland and Lexington counties over three consecutive Saturdays beginning Feb. 7. Students selected to participate will learn about IT architecture, application development and large-scale computing concepts from USC teachers and BCBS of South Carolina staff, according to Emard. As part of the camp, students will build their own laptop computer, which they will be able to keep. This year 115 students from more than 35 high schools applied to the camp, an increase over last year's 80 applicants, he reports.

"It has a little bit of an infrastructure and hardware bent," Emard says. "This isn't about coming together and writing some code or working on a small project. But it's a good introduction, and it's something tangible. Then we build on that."

Filling the IT Talent Pool

Both the consortium and the computer camp initiatives represent an evolution in how BCBS of South Carolina is addressing the IT talent shortage issue, Emard notes. The carrier's long-running ELTPs provide the carrier with immediate returns, namely better-educated IT workers. The new programs, however, offer no such immediate results: Even if the programs succeed in driving interest to the IT field, there's no guarantee that today's youth will become tomorrow's BCBS of South Carolina employees.

The carrier, Emard explains, has started to view the talent shortage issue as one that extends past the confines of its own business. ELTP programs might solve a part of the problem, but qualified workers are in such demand that the carrier sometimes sees its trainees hired away by other companies. "What we're finding is that, to be able to do this today, it is a 'rob Peter to pay Paul' proposition," Emard relates. "Our idea with the computer camps and other things to reach young people is to get more people into the [talent] pool. There's going to be an adequate enough supply so that we're all not going to cut each other apart to find [IT talent]."

Currently, however, universities across the country are seeing decreased enrollment in the areas of information technology and computer science. Further, Emard says, there is a misconception among young people who are interested in IT that "mainframe technology is dead." That's particularly problematic for BCBS of South Carolina: Along with its processing-heavy Companion Data Services subsidiary, the organization operates one of the largest data center environments in the world, according to Emard, who has a computer science background and reports directly to BCBS of South Carolina CIO Steve Wiggins.

"We, in turn, have seen a problem in terms of being able to find quality hires. Even the ones who are coming out [of collegiate IT programs] are not necessarily geared toward the kind of programs that lend themselves to large-scale, high-volume transaction processing such as in the insurance, retail and banking industries," Emard relates. "The kids just are not equipped or prepared, so we're having to invest a lot of money in Entry Level Training Programs."

Emard expects that there eventually will be less need for costly ELTPs if programs like the consortium and the high school camp are successful in cultivating more interest in the IT field and mainframe-related skill sets. "Somewhere down the road — and I'm thinking within a few years — Steve Wiggins and I are not going to have to spend $20,000 for every entry-level hire we make to go through an Entry Level Training Program because they are going to be more equipped," he says.