Flash Gallery: Inside the EmployerLink Redesign

Bob Mau has worked at Medical Mutual of Ohio for more than two years, but his history with the Cleveland-based carrier and its group Web site, EmployerLink, goes back further than that. Prior to stepping into the role of vice president of e-business at the carrier in January 2007, Mau lent a critical eye to EmployerLink and Medical Mutual of Ohio's other Web sites as a consultant.

Mau recalls that, at that time, the EmployerLink site was not living up to expectations. From a functionality standpoint, most of the tools were in place, but, "[The group site] was one that stuck out to me as having some room for improvement from a usability perspective," he says.

Others within Medical Mutual of Ohio shared Mau's views. In June 2006 a consulting firm, Cleveland-based Brulant (since acquired by Rosetta) performed a site usability study, which confirmed what many had expected. "There was high abandonment in the [registration] process, and a lot of phone calls were made either to membership or technical support," Mau relates. "We saw that people would start a process and they wouldn't complete it. There was a sign of confusion."

To address those issues and others, Medical Mutual of Ohio and Antares Management Solutions, a wholly owned subsidiary that handles the bulk of the carrier's internal IT work, set out to redesign the EmployerLink site, with a focus on improving the overall usability of its membership and billing functions. Those functions needed to be simple enough for the insurer's small-employer group customers and efficient and fast enough for the company's larger groups, according to Mau.

The project began in October 2006 and the new site went live a year later. Soon after the launch, Mau reports, the carrier's online bill pay numbers started to go up. "It was a testament that the new registration page worked," he says. "We were seeing twice as many people register." 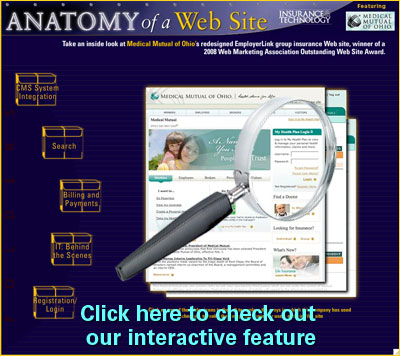 In addition the EmployerLink site was recognized in October 2008 by the Web Marketing Association (WMA) with an Outstanding Web Site Award in its 2008 WebAwards competition. In each criterion -- design, innovation, content, technology, interactivity, copywriting and ease of use -- the EmployerLink site scored higher than both the industry average and the WebAward average, according to WMA.

"For the majority of the site, by and large, it was the same features and functions," Mau says. "It's an example of the value that redesigning a site can have."

While better usability and navigation were both key to the redesign effort, IT work performed on the back end was equally significant, according to John Frohlich, director of information systems development for Antares Management Solutions. The site, he says, underwent a major retooling with regard to infrastructure and architecture.

"We literally separated the front end, the back end, the access layers and the business logic," Frohlich explains. "That was big in making this system more streamlined and in allowing us to make changes in the future faster."