50%
Tweet
More than one-third of insurance IT pros are looking for new jobs, according to the 2014 InformationWeek Analytics IT Salary Survey.

To get a good idea of which insurance technology jobs are hottest, who commands the top dollars and what particular skillsets are most in demand, just consider current insurance industry trends. The 2014 InformationWeek Analytics U.S. IT Salary Survey reveals that competition for IT talent in insurance is most intense -- and salaries are highest -- for employees who can successfully deal with and develop solutions in the areas of big data and analytics, social media, cloud, information security, risk management and regulatory mandates.

"Insurers must all invest in technology to deal with the big trends," says Frank Wander, CEO and founder of PeopleProductive, a consultancy that provides workforce productivity and solutions for innovation to its clients. "And where investment goes, jobs follow."

However, although the emerging hot technology areas and a slowly improving economy are combining for a stronger employment picture, this is not consistently reflected in insurance industry salaries for IT staff and management, according to the 2014 InformationWeek Analytics study. Median base IT salaries in insurance haven't budged since last year, remaining at $90,000 for staff and actually dropping slightly for managers, from $125,000 to $124,000. Total compensation for staff, taking into account bonuses and other direct cash payments, rose 1.9 percent to $96,000 in 2014, although total compensation for managers dropped slightly to $138,000, reports InformationWeek Analytics.

Still, these salaries come with some perks. In addition to cash bonuses, both insurance IT staff and managers said they expect to receive 401 (k) matching, health insurance, training and tuition reimbursement. Nearly half of managers reportedly get a company-paid smartphone; about 20% of staff members expect to receive health club membership as part of their overall compensation. 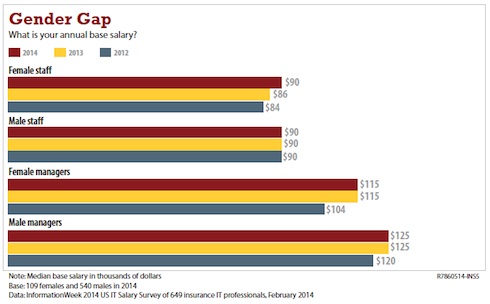 Interestingly, female IT staff in insurance actually earned slightly more in total annual cash compensation than their male counterparts in 2014 -- indicating that female staff earned larger bonuses than men. A majority of staffers and managers said they expect to receive a bonus in 2014, with 78% of IT staff members and 90% of managers anticipating this benefit. Bonuses are most often tied to personal and/or company performance, but more than a quarter of survey respondents indicated that their anticipated bonuses and other direct cash payments are due to either their division's performance and/or company profit sharing.