50%
Tweet
The combined impact of four technologies has the potential to drastically reduce the amount of auto premium, and thus overall premium, in the U.S. P&C insurance industry over the next decade, according to author Donald Light.

Donald Light, Celent
Imagine a scenario in which U.S. auto insurance premium drops from 40 percent of the P&C industry total today to only 13 percent by 2022; imagine that, as a consequence, total industry premium itself will decline by 26 percent over the next decade. Owing to the potential influence of already-existing technologies, American P&C insurers should prepare for that "provocative but plausible" scenario explored in a new Celent (Boston) report, "A Scenario: The End of Auto Insurance. What Happens When There Are Almost No Accidents."

If a world with almost no auto accidents seems counterintuitive, that's largely because the technologies driving such a scenario — telematics, collision avoidance, automated traffic law enforcement, and, to a lesser extent robot cars — have tended to be considered separately in the public discussion, according to Donald Light, senior analyst, Celent, the author of the report.

"If you Google any one of these technologies you'll get an enormous number of hits but you won't see the impact on auto insurance," Light comments. "This report connects the dots."

Together these technologies have the potential to cause U.S. auto liability premium to drop from a current 25 percent of total industry premium to only 10 percent, and to lead auto physical damage to decline from 14 percent to 3 percent by 2022, the report says. The scenario explores how each of the technologies are likely to be adopted progressively in ascending order of impact, starting with telematics. 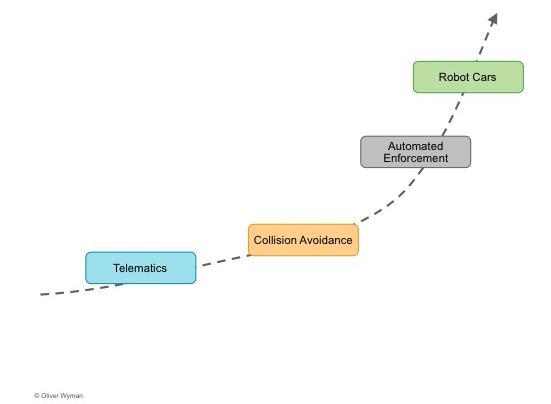 The four technologies at play in Celent's "End of Auto Insurance" Scenario in ascending order of industry impact.

Light stresses that the report considers a scenario rather than a prediction, but insists that insurers must begin to seriously consider the possibilities the scenario implies.

"This is the way things will move," he asserts. "The question is how far and how fast."

The answer to that question will largely be dictated by political will as expressed in what government will mandate, which will be conditioned in turn by voter demand and tolerance as well as the influence of manufacturers of the technologies in question.

Telematics and automated traffic law enforcement both faced initial resistance from the American public, Light acknowledges. First developed by Progressive in the U.S. about a decade ago, telematics saw its initial successes in Europe because of Americans' "Big Brother" concerns about their private activities. Automated traffic law enforcement — such as stop light cameras and speed cameras — has been met with similar concerns about surveillance, as well as complaints of malfunctions, law suits for wrongly issued citations, and even drivers in some locations taking out cameras with shotgun blasts. Multiple collision avoidance technologies are available today, but mostly as features offered in high-end automobiles, such as forward collision warning, lane departure warning, adaptive headlights and side-view assist, among several others. Robot cars form a much smaller influence in Celent's scenario but, as with all the other technologies, already exist — for example, Google's self-driving car.

In the decade or so since its inception, telematics has come to be regarded as a major opportunity for American insurers. Crash avoidance technology is a growth industry with the potential for significantly mitigating causes of accidents by supplementing drivers' abilities. Robot cars are most definitely on their way, over the longer term. The greatest variable for the Celent scenario is the degree to which the four technologies will be mandated for use, which itself will be a matter of push and pull involving legislators, regulators, voters and manufacturers. As Light writes in the report:

Celent does not make political predictions; however, it is plausible that political support for these changes would be based on value-oriented arguments invoking safety, security, and protection of the young and vulnerable. Political and financial support might also come from technology providers and automobile manufacturers.

Telematics has gained ground on just such an appeal on a commercial basis, with insurers marketing the capabilities to policyholders with teenaged children, and as all former student drivers will have heard, driving is a privilege rather than a right, so regulators have greater latitude in their control over this activity than others.

Having established the plausibility of the scenario, the Celent report details how declining auto premium is likely to manifest itself and counsels insurers to prepare. The given reduction in a given insurer's total premium will depend on the proportion of auto lines within the insurer's total book of business, according to the report, and sales service and claims will see the largest reductions in activity and budget levels should the scenario be realized.

Celent suggests specific questions that insurers must ask themselves, including how they are monitoring technology-driven changes in insured losses and what they should differently year-to-year. The report also addresses more fundamental – and potentially uncomfortable – business questions such as whether an insurer should grow its non-auto lines, pursue mergers and acquisitions, put itself up for sale, or simply accept its status as a smaller company.

While reemphasizing that the scenario is just that — a "could be" projection not a "will be" prediction — Light acknowledges that something along the lines of the scenario is almost bound to happen. However insurers decide to respond to this well-founded projection of possibility, he cautions, "Ignoring the scenario, and not watching to see how closely actual developments follow it is a poor option."