50%
Tweet
A former insurance CIO traces the endemic failure of IT projects — and the economic waste it implies — to the imposition of an industrial process on the social phenomenon of knowledge work.

Former Guardian Life CIO Frank Wander’s new book recounts a history of IT failure and offers a prescription for success. He begins with a list of major missteps from the 1960s forward, along with statistics from sources such as the Standish Group, Gartner and McKinsey verifying dismal rates of project success right up to the present. Wander’s diagnosis is that IT organizations remain trapped in an industrial mindset that works well for manual processes but is worse than incompetent at the task of managing intellectual processes. Management guru Peter Drucker would seem to agree.

Wander, who now heads the IT Excellence Institute, quotes Drucker in the first chapter of Transforming IT Culture: How to Use Social Intelligence, Human Factors and Collaboration to Create an IT Department that Outperforms. Wander sees growing awareness of a “blind spot” in the business world: people feel unease about the future, he says, and have some sense of an imminent and momentous shift. Peter Drucker anticipated the problem, Wander suggests:

The most important, and indeed the truly unique contribution of management in the 20th century was the fifty-fold increase in the productivity of the manual worker in manufacturing. The most important contribution management needs to make in the twenty-first century is similarly to increase the productivity of knowledge work and the knowledge worker.

That goal requires evolving from industrial process-based efficiency to what Wander calls “people-based potential,” which will be manifested in an “emerging socioproductive age.” He stresses that the process lessons of the industrial era are by no means to be forgotten, and indeed have important applications in the engineering aspects of IT. However, he insists that IT projects are inherently emotional and quasi-artistic endeavors. Process discipline is a foundation upon which to erect a productive social structure — the social system, according to Wander, is the factory. The people who make it up must be considered not simply as means to an end, but as ends in themselves.

That being the case, managers need to add new skills to their standard management and process disciplines, according to Wander. Over a career of fixing broken IT organizations and running projects on time and within budget, Wander has affirmed the value of a humanistic management approach characterized by “prosocial” behavior and an ethos of serving one’s subordinates. He writes on p74:

To transform organizational behavior, I established ground rules in my town halls and leadership meetings by communicating that the basis of our success would be building a trust-based community where meaningful collaboration and prosocial behaviors would infuse every interaction. Those behaviors included sharing/helping, caring for one another (empathy and compassion) openness/acceptance of others’ personalities and ideas, complete transparency (no hidden agendas), and an absence of blame. Ultimately, the goal was to create harmony, because that is a powerful driver of collaborative productivity.

Musical performance metaphors abound in the book, with teams likened to orchestras or improvisers in ensemble. Probably the most common word in the book is “caring,” used in the sense of managers taking a humane approach to their knowledge worker subordinates. If it all sounds a bit touchy-feely, don’t be fooled: the book is about competing fiercely — but not against the people on your own team.

[Related: Workforce Optimization: The Science of Efficiency, The Art of Customer Experience .]

A “cruel but fair” approach just won’t cut it with knowledge workers, Wander implies, and backs up his point of view with science. He details how the limbic system responds to threats by triggering survival mechanisms that drown out creativity and cooperation. On p42, Wander caricatures knowledge workers in a socially toxic work environment with a photograph of the statues of Easter Island staring stony-faced. The caption reads: “The Beatings Won’t Stop Until Morale Improves.”

Most readers will probably recognize elements presented in Wander’s Chapter 5 case study: “An Unproductive State of Mind: Toxic Leadership and its Aftermath.” However, in most cases the toxicity of a given organization will be considerably lower — and its effects more subtle. Few people go through a career without intervals of living hell — and probably some moments of organizational bliss as well. Most knowledge work is probably well within the tolerable zone (leaving aside the time immediately around deadlines) but still tinged throughout with a detectable odor of Dilbert — Scott Adams' cubicle-dwelling cartoon character that began satirizing the emerging knowledge work environment in 1989.

It is in that tolerable zone that Wander’s work may be most important, because the problem is so pervasive. A Dilbertized work environment, where people are cogs in a machine, their individuality and dignity subordinated to bureaucratic processes, is at best a mediocre environment. If you depend on people’s creativity, you must engage them as individuals with a unique contribution to make. Managers who master that engagement will enjoy a team that is not only more productive in the most basic sense, but also more creative and innovative than the Dilbert shops. If enough teams begin to work at this level, then the IT organizations’ project record may finally turn from failure to success. You can measure that as you like: in happiness — or in cold, hard cash. 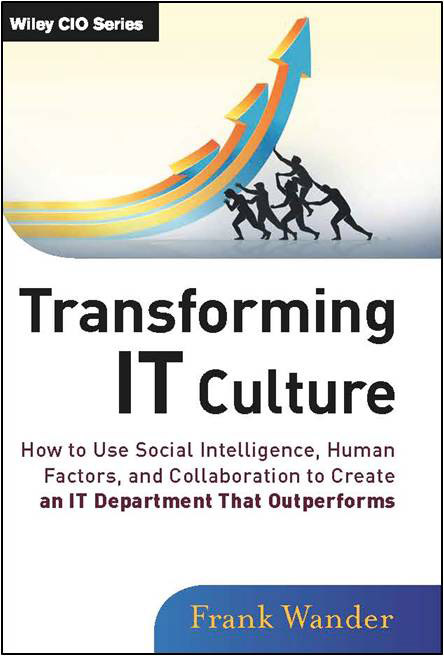