50%
Tweet
Big Data and analytics are implicated in four of the respondents' top five business disruptors and explicitly identified as comprising the fifth. 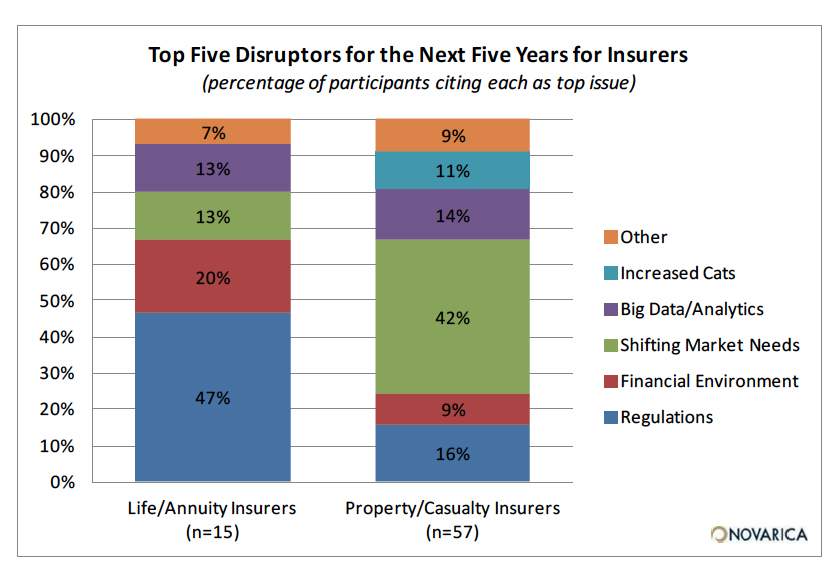 The analyst goes on to give examples of each, followed by "preparations," or potential solutions. Analytics are explicitly mentioned in three and implied two others. For Increased CAT Losses, Novarica recommends expanded data capture and refreshment of predictive models; Shifting Market Needs comprises an enormous range of activities, many of which have an analytical dimension. Matthew Josefowicz, the report's author, acknowledges as much on the section on Big Data and Analytics:

Big Data and analytics, which play a role in many of the other issues discussed here, were also cited specifically by many insurers as a general issue. Dealing with massive volumes of structured and unstructured data is a considerable technology challenge for which most insurers' IT infrastructures were not designed.

The report is nevertheless interesting for considering each of the disruptors in turn, along with Novarica's identified impacts and "preparations." The main graph provides a stark map of uncertainty, with regulatory imponderables dominating life insurers' concerns and shifting market demands driving anxious product and distribution channel creativity on the part of P&C insurers.

But there's still a covert lesson from the report. On the one hand, big data and analytics is there in black and white, as it were, as an explicit, bona fide disruptive force. On the other, it lurks as a kind of éminence grise of technological influence as insurers move closer to becoming digital enterprises and competing on analytics.

Significantly, there was a difference of only one point in how high Big Data and Analytics was ranked between life/annuities (13%) and P&C (14%). Here are some of the ways respondents to Novarica's survey are addressing this disruptor:

• We are learning the new technologies so that we can harness the power of big data for underwriting and marketing.

• Establishing an infrastructure to support the volume [of data]

• Implement a framework for decision support

• We have two active pursuits with the named vendors in the space and recently installed an enterprise repository to migrate data.

[For another view on insurers' emerging challenges, see 2013 a Pivotal Year for Insurance CIOs: Gartner .]