50%
Tweet
Believe it or not, flying cars are on their way. How can insurers provide accurate cover for inevitable accidents?

About 50 years ago, the animated sit-com "The Jetsons" presented a space-age family -- mom and dad George and Jane, kids Judy and Elroy, dog Astro, and robot maid Rosie -- living in Orbit City circa 2062. Their means of transportation was an aerocar. We're about 50 years away from that date, and it appears the aerocar is on its way: The Massachusetts-based aviation company Terrafugia recently developed and road tested an aircraft with on-road capability.

It's doubtful the cartoon had an episode that dealt with insuring the family vehicle. However, insurers might need to get ready. While certain design attributes of the Transition, such as its sedan architecture, may look familiar, others, including its fold-in wings, have yet to be seen on private passenger automobiles. The Transition will not be commercially available until at least 2015, and its hefty price tag of approximately $300,000 means few if any of them are likely to land in insurer's books any time soon. However, automobile insurers are presently vying to keep pace with a flurry of other recent innovations, including lane departure and blind-spot warning systems, driver alertness monitoring, collision preparation systems, and self-parking. Vehicle rating programs that don't adequately consider the effects of such technologies may go the way of the Ford Edsel.

Automobile manufacturers often introduce new vehicle systems in a relatively small number of high-end models. As those new systems gain popularity and acceptance, they eventually infiltrate the vehicle mass market. Systems that promote vehicle safety often become federally mandated. That's what happened with seat belts (mandated in 1968), airbags (1998), and, most recently, electronic stability control (ESC). Introduced in 1995, ESC systems -- which prevent rollovers and sideways skidding -- became relatively standard by 2001 and federally mandated for all vehicles beginning in 2012. You can see how the percentage of U.S. vehicles equipped with ESC has increased each year: 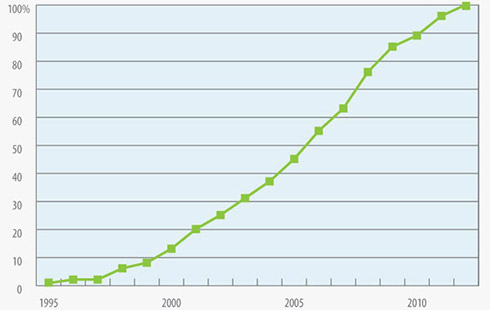 In 1995, only 1 percent of new vehicles were available with electronic stability control (ESC) systems as standard or optional equipment. As of 2012, ESC systems are mandatory in all new vehicles. (Source: Insurance Institute for Highway Safety).

If patterns such as these are a window into the future, then the next proving ground for automotive innovation may relate to vehicles' fuel tanks -- or lack thereof. Over the past quarter century, average vehicle weights have increased by almost 1,000 pounds while average horsepower has nearly doubled. So, even as vehicles have become more fuel efficient, such gains have been offset by increased power and poundage.

Times are beginning to change: Recently released electric vehicles such as the Honda Fit EV or Scion IQ have fuel economies in excess of 110 miles per gallon (MPG). And as in the past, government agencies are beginning to latch on to those innovations. The Environmental Protection Agency's Corporate Average Fuel Economy (""CAFE"") rules set standards of 54.5 MPG for automakers by 2025.

The Transition itself uses an electric-gasoline hybrid technology combining state-of-the-art technology from the automobile industry with autopilot technology adopted from the aviation industry. Back on the ground, the auto industry and researchers are developing other prototypes that use ethanol, electricity, and hydrogen. Each of those approaches has both benefits and risks -- just mentioning the name Hindenburg is enough to realize how serious such concerns can be. That again raises the primary issue for actuaries: the possibility of accidents and insurance losses.

[Would you insure a flying car?]

The fuel efficiency posited by CAFE standards and the enhanced safety focus exemplified by ESC requirements do not always go hand in hand. Ultra-light cars may diminish the need for fuel consumption, but they may also provide less protection during collisions. A 2009 study by the Insurance Institute for Highway Safety (IIHS) found that smaller vehicles performed consistently poorly in collisions with larger vehicles. In contrast, the pint-sized Smart Fortwo performs well in crash tests due to "extreme structural rigidity combined with energy-dissipating body panels and eight airbags that protect from every angle." Similarly, some manufacturers are experimenting with prototypes that use light and strong materials such as carbon composites, which have found acceptance in racing cars and some models of airplanes.

The speed and contradictory nature of these technological developments creates a challenge for insurers. Traditional rating approaches are poorly equipped to react to such changes. Methods that rely exclusively on credible experience with each vehicle model take years to capture all the effects of innovation. In the meantime, those rating plans may produce counterintuitive results. For example, ESC systems were initially available as costly optional equipment. As such, programs using manufacturer's suggested retail price (MSRP) as a proxy for experience derive higher loss costs for vehicles with ESC than for identical vehicles without it -- a less-than-ideal situation.

Fortunately, modern rating approaches are able to respond more quickly and effectively to innovations. Statistical techniques treat every vehicle model as a unique set of attributes, with body style, dimensions, performance metrics, and safety equipment and ratings each affecting loss propensity. In this way, the vehicle's estimate is the sum of the effects of its individual attributes. Virtually identical vehicles are likely to receive identical treatment, whereas ones with new safety systems are likely to receive discounts.

In some cases, the effects of new technology are challenging to estimate. Collision preparation systems may help prevent accidents and protect occupants from harm. However, they can also make vehicles more costly to repair or replace. There may be value to performing separate frequency and severity analyses by coverage or even by comprehensive peril -- a flying car may be susceptible to wind-related damages but relatively safe from falling objects. Insurers that develop rating plans at such a refined level are better equipped to understand and respond to changes in vehicles.

An attribute-driven approach is not a panacea. No statistical method can overcome a complete absence of empirical data; therefore, as a precondition for rating, a vehicle system must first go to market in a representative sampling of vehicles. Insurers also must continually reevaluate rating plans to guarantee that they reflect technologies that have become commercially available. Carriers may need expertise in nonactuarial disciplines to describe such innovations in quantitative or qualitative terms for use in pricing. For example, the effectiveness of collision preparation systems may vary among manufacturers, but since almost all involve braking, a more reasonable and consistent metric for rating might be braking distance.

Despite the challenges, vehicle rating has come almost as far as vehicles themselves. Granted, auto insurers may not be ready to insure the flying Jetson family car, and initial estimates are that annual premiums could run in the tens of thousands of dollars for such vehicles. However, insurers on the cutting edge of technology are likely to find themselves soaring above less forward-thinking competitors for years to come.

About the author: Jim Weiss is manager of personal automobile actuarial at ISO, a member of the Verisk Insurance Solutions group at Verisk Analytics.