50%
Tweet
Aetna CIO Meg McCarthy applied her 20-plus years experience in the IT consulting and healthcare fields to bring the carrier to new levels of process excellence, efficiency and delivery volume.

By the time Meg Mccarthy joined Aetna in 2003, she had extensive experience on both the provider and payer sides of the healthcare industry, having been CIO at two major Catholic health systems and SVP of IT at Cigna (Philadelphia). These career milestones capped a professional journey in technology and healthcare that began with McCarthy's hospital work in her teens, continued with her earning a master's in public health/hospital administration from Yale, and led to a career in healthcare and IT consulting during which McCarthy held senior management and partnership positions at both Accenture (Chicago) and Ernst & Young (New York).

Hartford-based Aetna (more than $1.7 billion in 2006 net income) secured McCarthy's talents and experience at a crucial time not just for the healthcare industry -- when increasing costs were driving a revolution in consumer interaction with their health insurers -- but also for Aetna itself. After reporting losses of about $266 million in 2001, the carrier was in the early stages of a business transformation led by then-CEO Jack Rowe and president (now CEO and chairman) Ronald Williams. 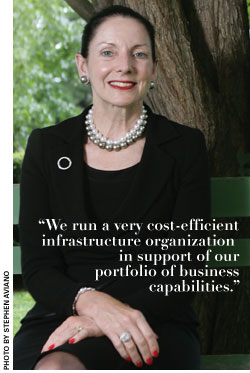 Williams, a graduate of MIT's Sloan School of Management with a background in the technology industry, recognized the importance of technology not only for increasingly important customer engagement purposes, but also as an opportunity to introduce greater efficiency to the ailing company. Over the years, however, Aetna had acquired several companies and, along with them, their technology platforms. "The assets of the acquired companies had not been integrated so that we had a standard operating platform from which to launch strategic technical initiatives," McCarthy explains.

Williams, McCarthy relates, "Kicked off a body of work to integrate the technology platforms and build a very robust management information system." With those objectives in mind, "He could see that the level of process discipline needed in the IT organization wasn't there," McCarthy adds. "Aetna owned every methodology that was ever built, but they hadn't implemented any of the methodologies in a consistent fashion."

With a view toward amending that problem, Williams hired McCarthy as head of Aetna Project Services. Within six months she was leading Aetna's newly formed Business Solutions Delivery (BSD) unit to drive program/project management capabilities for the company. Housed on the business side but reporting to then-CIO Wei Tih Cheng, BSD comprised more than 2,000 IT project management, application development, testing and production support services staff within an organization accountable for delivery of all IT business solutions at the carrier. "Over the next few years I worked with Ron and Wei Tih Cheng to focus on how we were governing the IT portfolios and how we were building discipline into all aspects of the IT organization," says McCarthy.

With the retirement of Cheng, McCarthy was appointed Aetna's CIO in June 2005, reporting directly to Williams. With her promotion she took on responsibility for Aetna Information Services (AIS), which includes IT architecture, solution delivery, infrastructure and network services capabilities. Among the major initiatives McCarthy has driven to conclusion as CIO are the achievement of CMMI (capability maturity model integrated) Level 3 certification in February of this year, and the implementation and rollout of a consistent metrics model to track the performance of AIS and its progress against strategic objectives.

In the past three and a half years, McCarthy relates, IT has significantly increased the volume of work it delivers to the business. "When we started this work we baselined a set of metrics around productivity, utilization, on-time delivery and business partner satisfaction," she says. "We have significantly improved on all those metrics, and we are a top-tier performer if you were to compare us to other companies on that basis."

McCarthy singles out Aetna's network and data center infrastructure organization in this respect, which operates at a Six Sigma level and, she asserts, has no peer in the health insurance industry. "We run a very cost-efficient infrastructure organization in support of our portfolio of business capabilities," she says. "We are usually compared to large banks and have outperformed our banking colleagues by over 40 percent in all of the commodity aspects of the benchmarks that we apply annually."

McCarthy also has driven greater efficiency and ROI through the establishment of joint IT portfolio planning and governance. Aetna's IT steering committee -- which includes McCarthy, Williams, president Mark Bertolini and Joseph Zubretsky, Aetna's CFO and chief enterprise risk officer -- presides over the governance process, based on a three-year planning cycle.

Working with key executives within Aetna's major business domains, the committee authorizes multiyear IT blueprints and road maps that are updated annually. According to McCarthy, the committee weighs priorities articulated within those documents to make decisions about the allocation of resources. "On a day-to-day basis we have a portfolio manager structure, so the IT leaders who work with me interface with portfolio management resources on the business side to work our way through any adjustments and rebalancing activities that are needed in response to business changes or other considerations," she says.

The governance process mandates every project team to hold weekly meetings. McCarthy herself chairs a weekly meeting that serves as an escalation point for issues about scope, schedule or cost that may arise among the 300 or so projects that are likely to be ongoing at any point in time at Aetna. "If it's something I can't make a decision about, I will bring it to the IT steering committee or to Ron [Williams] directly," McCarthy says.

Among the most recent notable deliveries emerging from this process, McCarthy continues, is the deployment of a personal health record (PHR) utilizing capabilities of Aetna subsidiary ActiveHealth Management, which builds decision-support capabilities for health plans. The PHR was rolled out first to about 30,000 Aetna employees in February and has since been deployed to more than 400,000 Aetna plan members, she says, explaining that the PHR is prepopulated with information Aetna has about a member. Members also can add information by performing a personal health assessment, which invites them to share information about a variety of health-related facts and activities, including medical issues, exercise levels, and regular use of vitamins or over-the-counter remedies, McCarthy adds.

The PHR's embedded decision-support capabilities enable personalized recommendations driven by "care algorithms," according to McCarthy. "We run data about members through what we call our CareEngine, and if the care algorithms generate something that is important for the member or their clinician to appreciate, we serve that information up in the form of a 'care consideration' that is sent to the physician and the member," she explains. "We believe this technology is very important in improving the quality of care of the members we serve, hopefully ensuring that they seek the attention they need sooner rather than later."

Hobbies/Pastimes: Golf, jogging, swimming.
Fun Fact: McCarthy is in the process of restoring a 1934 Packard automobile.