He says it's not clear whether an early three-year stint as a volunteer firefighter/EMT might have had some influence, but for most of Jim Court's career he's been putting out fires, if only metaphorically. In a management career spanning more than 20 years, almost every assignment he had been given involved a turn-around or fixing something that was broken. It wasn't until he joined Irvine, Calif.-based Five Star Insurance that he had a chance to build something new from the ground up.

Five Star's leadership hired Court in February 1999 specifically for the purpose of creating and leading the company's technology organization through acquisition and growth. "I was brought on board about eight months before the acquisition by First American [Santa Ana, Calif.] took place, in order to start up the organization's technology group and to position it for acquisition and subsequent growth," Court says.

After assessing Five Star's technology capabilities as inadequate to support nationwide expansion, Court developed a five-year technology plan designed to conserve Five Star's positive small-company qualities while providing the necessary power and scalability to meet future business objectives. "Five Star was noted for exploiting market dislocations and being able to respond very rapidly to changing market conditions," he explains. "Along with supporting growth, maintaining that agility was a critical objective for us."

Management had notions of what it would take to recalibrate the company to fit its new strategic plan, Court says, but having come from outside the industry, he applied his own technical methodology and philosophy. Following an RFP process and subsequent meetings with a variety of vendors, Court came up with an initial plan that carried a $2 million price tag -- an attention-getting proposition for a company writing $12 million in annual premium at that stage in its history.

"Initially, it was a challenge convincing our executive team and educating them about the importance of spending that much money given the value that would be realized by being able to leapfrog the competition," Court recalls. As the company took on its new identity as First American Property & Casualty Insurance Group, he adds, "It took about eight months to work through the project planning cycle and then, ultimately, get approval through First American's executive team."

Court proceeded to create his own team to select and implement infrastructure, freeing a core technology team to focus on building technology to support the needs of the business. Court took a just-in-time approach to staff requirements, making the necessary hires only after selecting Fiserv Insurance Solution's (Brookfield, Wis.) Specialty System in August 2000 as the carrier's core insurance platform for policy admin, billing, claims and imaging capability. The Fiserv system went live with First American P&C's first product in April 2001.

"We also had a data conversion associated with the project for which we added staff of our own, as well as seeking some staff flexibility by relying on the vendor's consulting resources," says Court.

First American took a fairly conservative approach to its foundational systems, according to Court. "For the core insurance transaction, it came down to reliability, scalability and availability," he recounts. "Once we had that in place, we started wrapping it with different capabilities for our independent agent distribution force."

Still, efficiency and scale remained key. For example, an analysis of incoming calls to the carrier's call center determined that 60 percent were billing related, Court notes. In response, "We quickly moved to extend that information to the agents via the Internet," he says.

While these layers continued to improve upon the quality of First American's service, the scalability of the core systems enabled the platform to grow rapidly -- 2005 net written premium was $125 million. "During my tenure we've experienced a tenfold growth in premium while maintaining profitability," Court reports. "To support that profitability, there's been an extensive partnership between the technology and business communities to implement systems while maintaining organizational agility."

Agent self-service also has supported profitability, by simultaneously increasing efficiency and convenience, and bolstering business retention -- which in turn helps to maintain growth. "By reducing call center volume, we've avoided hiring additional customer support reps, which equates to about $400,000 in savings to the organization annually," Court says. "We have also implemented electronic interfaces for lien-holder notification, so we don't send out paper for that purpose anymore."

Having realized significant benefits from extending self-service to distributors, First American is seeking to do the same for customers over the coming year. "We want to extend to them the same business model of 'Do business with us how you want to,'" Court says. "One example of that is a notification system where customers can opt to have us call them to be reminded of certain things or have us e-mail their dec pages to them." As in the case of service to agents, First American will continue to offer phone or paper-based services according to customer preference, Court adds.

Just as Court believes customers deserve to have high expectations of his company, he says he has high expectations when it comes to vendors that do business with him. That is driven in part by economics. "Compared to a much larger enterprise, the financial risk associated with a multimillion-dollar project is much greater to us should it fail," Court explains. "That drives much more partner due diligence and project assessment prior to approval."

It also drives a tighter partnership ethos. "We first look at the values of a vendor, and then we look at that product to make sure it's the right fit; only then does the vendor earn the right to be a partner," Court says. "We have very few partnerships -- such as with Fiserv, Duck Creek, KBA Solutions and Handysoft -- but those are trusted partners, and we value them very highly." 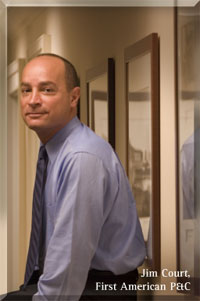 Click here to listen to podcast
Sponsored by IBM.

Career: From 1981 to 1985, Court was a senior field service engineer for Teledyne INET (Torrance, Calif.). He then held several operations and technology posts at Square D/EPE Technologies (Costa Mesa, Calif.) through 1996, including information systems manager. He held that same title at Printronix (Irvine, Calif.), where he worked until joining Five Star Insurance in 1999, which was acquired by First American (Santa Ana, Calif.) nine months later.

Management Philosophy: "Skills can be acquired but attitudes can't, so we look for the latter when trying to find someone who will fit in our organization," Court says. "It's not all serious business -- we like to have fun, too -- so personality is important. In the end, while products are interesting and indispensable, people are the most important part of the equation."

Last Book Read: "Cardinal of the Kremlin," by Tom Clancy.