Over the years, Bruce Goodman has been involved in some of insurance technology's most significant innovative developments -- or, as he summarizes it, "From punch cards to BlackBerrys." But the seven years since he joined Louisville, Ky.-based health benefits provider Humana Inc. "have been the most exciting part of my career," he declares.

That's because in his role as senior vice president and chief service and information officer of the $6.9 billion-asset carrier, he has been at the forefront of the healthcare/health insurance revolution, spearheading a technology transformation at Humana that has positioned the company as a successful IT innovator. "I can't think of a more interesting industry to be in," Goodman says. "Information technology has become totally pervasive in every aspect of the business and the value chain. It has been a very exciting transition."

Goodman credits Humana's founder, David Jones Sr., and Michael B. McCallister, director, president and CEO, with understanding and funding technology's potential early on, when the impact of the Web, for example, was not fully appreciated. "They made it possible," he says.

Addressing the needs of Humana's diverse constituencies has perhaps been Goodman's biggest task. Humana's regional and national networks include more than 400,000 doctors, hospitals, pharmacies and ancillary providers; it serves approximately 9.3 million medical members. According to Goodman, "We need to make those different constituencies happy, take the hassle out of their interactions with us and try to encourage self-service as much as possible."

Accordingly, he has focused on how IT can contribute to Humana's goal of being the easiest-to-work-with carrier. This was formalized in 2002 when Goodman added the chief service officer title. "I got added to my IT responsibilities all of the back-office service responsibilities, the idea being that coupling those two organizations would enable IT to very effectively be leveraged throughout the service environment," he explains.

Earlier this year, Humana was named easiest insurance company with which to do business by medical journal Physicians Practice -- evidence of the success of the realignment. But it hasn't been simple. "The biggest challenge is to match the vision and expectation with the execution," Goodman notes. "It's fairly straightforward to decide what you want to do, but less straightforward to know what you have to do to get there."

Under Goodman, Humana's IT organization has developed a key mantra for IT investment: "Partner before buy, and buy before build," he says. "We look for opportunities where we could be primarily systems integrators. That was the only way that we could accomplish some of the business goals in a timely enough fashion."

One successful partnership actually has been with a competitor, Blue Cross and Blue Shield of Florida (BCBSF; Jacksonville), to create a statewide physicians portal called Availity, which processed 100 million billable transactions in 2005. "We combined the technical resources of both companies to build out the portal capability," Goodman says. "Today, 95 percent of the physicians in the state and all of the hospitals use Availity. That would not have been possible just with Humana."

This partnership also is sponsoring an electronic medical records pilot that is under way in Florida. It's a natural extension of the Availity initiative, Goodman notes, because "healthcare payers are in a fairly unique position, in terms of having a very good, consolidated view of many of the patients."

Humana also has partnered with EDS (Plano, Texas) to codevelop a health claims system; and with several different vendors, including Kodak (Rochester, N.Y.) and Prinova Inc. (Toronto), to develop what Goodman describes as "a very different statement." Spurred by a need to provide prescription information to the several million new Medicare members, the statement (called SmartSummary) is a four- to eight-page color booklet. "We show [members] very graphically what drugs they use, where they [are] in the plan, give them tips about how to reduce their expenses, and even show them color photographs of their pills," Goodman relates. The offering recently was awarded a Stevie Award for Best New Product from the American Business Awards.

SmartSummary "was a really big collaboration between the business and IT, in terms of how to pull the elements of that report together," Goodman notes. And, ultimately, it is the business/IT partnership that's most important. "Getting that alignment with the key representatives who sign off on what IT is doing is absolutely critical," he says. But it takes time, he acknowledges. "In the beginning, information technology shares with the business the realm of the possible. But it really takes the business folks to decide what they want and to drive it."

But it all comes back to understanding the insurance business, he adds. "The amount of technology and IT capability, for the cost, over the past 40 years has been incredible and has enabled so much change," Goodman says. "But to really take advantage of that, you've got to understand the business. When I started out in life insurance, I became a chartered life underwriter so I could understand the business thoroughly and what salespeople were trying to do." This paid off during Goodman's tenure at New York-based MetLife in the mid-90s. "When laptops became feasible, MetLife was one of the first companies to deploy them with sales agents, because we had been thinking about it and knew which applications we wanted to [support]."

Agent-enabled laptops are emblematic of another significant transformation Goodman has witnessed. "Initially, information technology was a glass-walled data center buried in the basement of a corporation. Very few people had contact with it. The evolution has been to bring what was once inside that glass house, the very core, out to the very end-user stakeholders."

He continues, "In our business, you've got health insurance professionals and consumers directly interacting with our IT systems. It means gaining more and more skills and capabilities within the IT organization to understand that transformation and how best to leverage it and deal in this new world, [where] what you are delivering isn't a bunch of green bar reports anymore -- it is live, real-time interaction."

No culture shock: Goodman found "the quality of life got better" after he relocated from New York to Louisville. 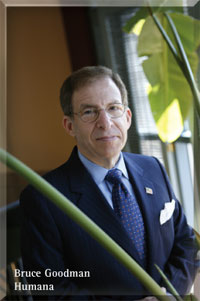 Size of IT organization: Approximately 1,500 employees, based in Louisville, Ky. and Green Bay, Wis.

Career: Goodman joined Humana in 1999 as SVP and CIO; in 2002, he was named chief service and information officer, with responsibility for service operations and IT functions, as well as billing and enrollment, provider affairs, and quality management. Previously he was CEO of C2K Technology Partners Inc. (Livingston, N.J.). Before that, Goodman was CEO of Prudential Service Co. He also held senior IT positions at MetLife. Goodman holds undergraduate and graduate degrees in electrical engineering from NYU and attended Stanford's Graduate School of Business.

Management philosophy: If there's a secret to Goodman's success, he says, "It's surrounding yourself with very good people who are smarter than you. You don't get anything done unless you're well aligned with the business. [IT professionals] can be technologists second, but they have to be really good business people first. Then it's a sense of urgency, a can-do attitude."