Although Shropshire, the boyhood home of Elite 8 honoree Chris Steward, is one of the most rural counties in England, its inhabitants are no strangers to revolutionary business practices. In the later part of the 1700s, Abraham Darby III built the first iron bridge of its kind across the River Severn, the county's primary waterway (in a town now aptly named Ironbridge). Shropshire has been known as the birthplace of the industrial revolution ever since.

While Steward cannot claim to have started as large a movement as Abraham Darby, his work as CIO and VP of information systems (IS) at Quincy, Mass.-based Arbella Insurance Group ($1.2 billion in total assets) also advanced a traditional business. When Steward started working for the carrier as a senior manager of new development in 2000, the company's Internet presence trailed far behind its competitors, he recalls. Worse yet, the situation had earned the company an unfavorable reputation among independent agents, Steward says.

As a senior manager and then as CIO (he was promoted in April 2002), Steward and his IS team (120 employees and 20 consultants) have spearheaded an effort to vastly expand Arbella's Web-based agent-facing systems, known collectively as e-SUITE. Adding capabilities such as policy and billing inquiry and seamless single sign-on, Arbella has seen its reputation among agents improve substantially, according to Steward. "We went from last place to, in some cases, first place in our independent agents' minds," he says. "We had very little agent-facing technology in place that they liked to use. It's been a complete transformation in that regard. What they can do now on our Web site versus what they could do eight years ago is like night and day." 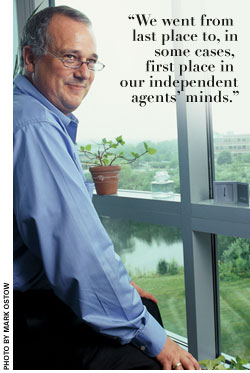 Steward points to an enterprise service bus as the key component of the e-SUITE initiative. "It allows us to integrate with our Web systems and services using a kind of hub model as a service-oriented architecture," he explains. Arbella also leverages AgencyConnect and AgencyPortal, two AgencyPort (Boston) solutions, in its agency-carrier interface, Steward adds.

The e-SUITE project, Steward says, encompasses his biggest challenge: balancing the three primary responsibilities of the CIO position -- developing new systems to compete in the marketplace, keeping current business operations up and running, and managing IT expenses. "There's a constant stress among those three things, and it's a real challenge to keep those competing desires in balance without getting them misaligned," he relates.

Thus far Steward has shown he can maintain that balance. As he has overseen Arbella's sizable increase in Web-based functionality, he's also delivered reductions in annual IT department costs. While he points out that the Web-based functionality investments are derived from an unrelated budget -- skewing the numbers in his favor -- Steward acknowledges that there has been a sizable reduction in IT operating costs between 2002 and 2006.

In recent years, Steward notes, the company has decreased its reliance on IT consultants, renegotiated major vendor contracts at more favorable rates and consolidated platforms. Each move, he says, has helped keep costs down. "We have managed to mostly fund the new initiatives from savings that we've found in the annual operating budget," Steward explains. Of course, he still has to invest money and time wisely when pursuing new IT initiatives.

Just as Steward doesn't have much time or interest in what's showing today at the multiplex -- "Mostly, I find that modern movies tend to be all special effects," he says, adding, "I prefer a good story line." -- he isn't swayed by technologies' bells and whistles. Rather, the IT investment decision-making process at Arbella is all about substance before style. "Technology should enable a business and not be driven by technology for technology's sake," Steward says.

Early in Steward's stint as CIO, a governance process was put in place for major IT investments, a move necessitated by the e-SUITE initiative. "We knew we had a lot to do, and we weren't sure what we could pay for and what we couldn't," he recalls. That process adheres to a fundamental philosophy, as Steward puts it, that IT investments should be business-driven. As such, the information systems department must prepare business cases for every major investment.

"Business cases explain the costs and benefits of executing an initiative to an executive group that makes the decision [whether or not] to execute and fund the initiative," Steward says. "All such initiatives that require major funding are evaluated against each other, with the most beneficial for the company as a whole being chosen for actual execution."

Even for more minor projects, a similar process is in place. Each business area at Arbella is provided with a forum where it can propose minor enhancements and prioritize projects. Each area's requested enhancements are then worked on based on priority. "In this way, business areas are not competing with each other for minor system changes, and they can each get the most important things to them worked on sooner rather than later," Steward outlines.

Part of delivering value in a timely manner is keeping the IT team motivated. When asked to describe his management style, Steward points to "Peopleware: Productive Projects and Teams," a 1987 book by Tom DeMarco and Timothy Lister. "It was the first time I had read something that focused on the people side of IT in a way that just struck a chord with me," he says.

Incorporating parts of the "Peopleware" philosophy with his own, Steward has developed a management style based on a "fundamental belief that a relatively small group of smart, hardworking people that are suitably empowered is the key to having a great IS team," he says. People, Steward adds, will be a key part of future IT projects at Arbella.

Going forward, Steward and the IS team will continue work on the e-SUITE initiative. But with many of the Web-based agent-facing capabilities already delivered, the project now has shifted toward replacing various legacy policy administration systems. That effort, in the end, could allow Arbella to enter new markets quickly, according to Steward.

As he begins work on replacing those legacy systems (his team currently is evaluating whether to build or buy certain parts of the system), Steward is searching -- internally and externally -- for workers with project management, architecting, data modeling and Web development (specifically Java) skills. "Our biggest current workforce challenge is finding and hiring good people in some areas," he says. "After the dot-com bubble burst, for many years we found hiring good people to be a relatively easy task in the Boston area. The tide seems to have turned a little and it's not nearly so much of a buyer's market as it once was."

As the e-SUITE initiative continues, Steward adds, he aims to find and retain IT professionals with the skill sets in place to succeed in today's increasingly Web-based market. The multiyear project's ultimate goal is to provide "easy-to-use, seamless straight-through processing" for Arbella's agent partners, Steward says. Before that can happen on the front end, though, there's a lot of behind-the-scenes work to be done.

"We're also looking to become more sophisticated in our underwriting, pricing algorithms and rate structures," Steward explains. "These could all be viewed as somewhat foundational things, but we've still got a lot to do to get that foundation in place before we can start to look at more futuristic technologies."

Position:CIO and VP of Information Systems, Arbella Insurance Group
Career at Arbella: After joining the company in 2000 as senior manager of new business, Steward was named CIO and vice president of information systems in April of 2002.
Management Philosophy: Steward's management style is a slightly altered version of the classic "hire good people and get out of the way" strategy that he says can best be described as hiring and retaining good people and then helping them succeed without getting in their way. "It also helps if they know how to have a little fun at the same time," Steward adds.
Pastimes/Hobbies: Tennis, golf.
Fun Fact: Although he can't read music, Steward plays the piano by ear.