London-based Aviva piloted its first usage-based insurance ­program before the iPhone — and the modern smartphone era — was even announced. Beginning in 2006, the company outfitted willing customers with a “black box” device that measured every journey. Data points examined included time of day, distance driven and type of road used. When this information was combined with the usual rating factors, such as type of car, where it is parked and claim history, Aviva ($47 billion in 2011 gross written premium) could produce a monthly premium bill. 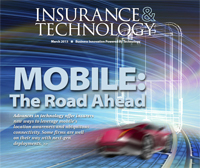 The company didn’t get much traction out of this pioneering initiative, abandoning the idea by 2008. But the ubiquity of smartphones — location-aware devices with always-on connectivity — piqued the carrier’s interest last year. Aviva believes that its latest attempt at usage-based insurance — the Aviva Drive smartphone app, which was released this past August after a beta test — will attract more customers to the product.

Interested parties download the app and allow it to record 200 miles of driving behavior, which Aviva then uses to determine a one-time policy discount — not a changing premium month to month.

“We believe Aviva Drive is a new way of doing things that will offer our customers a cheaper, less-intrusive and more flexible solution,” Steve Treloar, retail director for Aviva, tells Insurance & Technology via email. “When we have enough data, we will tell you immediately what the price is, so there are no nasty monthly surprises. And because the app is free to download and uses the customer’s own smartphone, there is no need for motorists to have a black box installed in their car, which monitors them constantly.”

How Clean Is Your Data?

Telematics programs grew up in the early 2000s, with insurers developing their own “black box” devices because there wasn’t a proliferation of location-aware, always-on devices in customers’ pockets. While using smartphones to collect usage-based insurance data makes sense from a cost-containment standpoint, it does introduce another issue: accuracy of the data. After all, if the point of usage-based insurance is to get a better picture of the policyholder, insurance companies want to ensure that they’re getting the cleanest possible data.

[What Start-Up MetroMile Teaches About the Future of Insurance]

"Aviva has sophisticated fraud-detection techniques already in place, which will be further enhanced to help prevent this from happening," Treloar continues. "One criteria we look at from journeys we receive is the consistency of driving over the 200 miles; if there is a radical change this would raise suspicions. We also believe that most people probably wouldn’t give their phone to someone else to use."

In order to boost the performance of the app, Aviva recommends that users place their phones in a holder while logging the 200 miles. The company has also built-in redundancies in case of cellular service interruption.

"We only measure the activity when you have a strong enough signal, so if GPS is lost momentarily or outside of our acceptable accuracy levels, we still keep the good data," Treloar points out. "If your phone cannot find a GPS signal at all, those miles driven would not count toward the 200."