Staying relevant in today's market requires giving customers the kind of service delivery they want, believes Ken Hittel, VP, corporate Internet, for New York Life ($249 billion in assets under management as of Dec. 31, 2007). Given the popularity of mobile technology, that presents novel technical challenges, he acknowledges. But even knowing what to provide and when is a challenge in itself, Hittel says.

Last April New York Life released its first mobile capabilities, making informational content available to customers over their cell phones and handheld devices. In early 2009 the New York-based carrier introduced more mobile capabilities, including locator applications that enable users to find the address and phone numbers of local agent and carrier field offices; and two interactive forms, one for indication of interest in becoming an agent and the other to subscribe to the carrier's "What's New?" newsletter.

"We wanted to provide the most actionable types of items that we could on a mobile device, and one of the things people are constantly using their phones for is finding address information and telephone numbers," Hittel explains. "One of the things we think is cool about our agent locator and office locator is that as you search, once you find the information you're looking for, all you have to do is click and you're calling that person or that office." 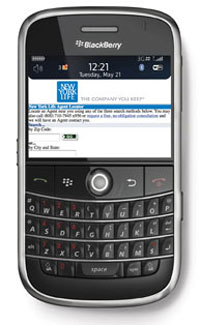 New York Life´s mobile Agent Locator application enables users to find the address and phone number of local agents and ‘click-to-call’ those offices.
In providing these capabilities, New York Life overcame the technical challenge of making them compatible with 98 percent of mobile devices, which translates into 700 different types of cell phones and PDAs, according to Hittel. But the decision about what to provide wasn't a fait accompli, he emphasizes.

For example, "In April 2008 we didn't feel that it made sense to put any forms in the mobile site because we didn't think that people had much inclination to fill them out," Hittel relates. "However, it soon became clear that people indeed will fill out forms" on mobile devices. That insight, he adds, was powered largely by informal observation of mobile behavior, including among the staff at New York Life, who were quick to check and modify travel plans, for instance, on their handheld devices.

New York Life chose as its technical partner Usablenet, a New York-based vendor whose mobile platform has enjoyed considerable success with airlines, among other industries, Hittel reports. Noting that work for the April 2008 mobile functionality rollout had begun only two months earlier, he says, "One of the advantages of working with these guys is that they can do their part very quickly."

If enhancements debut at a slower pace, that's because deciding what they should be takes considerable deliberation among the technology and business sides at New York Life, Hittel explains. "Those discussions have to take place over a period of time -- it's not something that can be decided in a week or two," he remarks.