If you want to understand the maximum destructive force of Superstorm Sandy, nothing beats the before/after photographs of the coastal areas hit by storm surge. However, if you want to understand Sandy as an insurance claim and loss event, a tour of Northern New Jersey better illustrates the magnitude of Sandy as a windstorm. Uprooted trees and stacked timber cleared from roads are ubiquitous in the northern half of the State, and in some places the extent of the destruction is shocking. 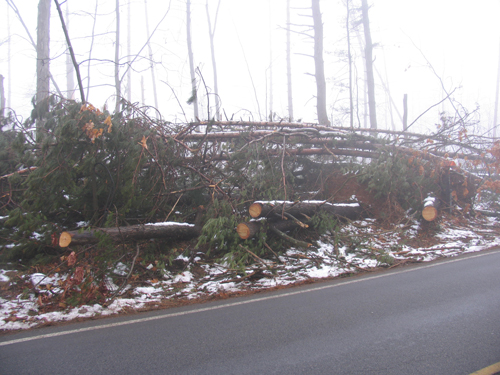 Most people know that New Jersey is densely populated. Probably less know that it's densely forested. If all someone knew of New Jersey was from flying into Newark Airport or taking the Turnpike between New York and Philadelphia from New York, they could be forgiven for thinking that "Garden State" was an epithet bestowed in irony. But the truth is that New Jersey has a great abundance of trees. If you take in the cliff-side view of Eagle Rock Reservation in West Orange in summertime, you'll see an awe-inspiring vista of Manhattan — and a sea of green leading up to it. But that's nothing compared to the pine barrens of the south, or vast stretches of Hunterdon, Warren, Morris, Sussex and Passaic Counties in the north, where forests have replaced farms during the last century. Probably few would guess that one of Northern New Jersey's most controversial issues is how to deal with an out-of-control bear population, but the area's forests support large numbers of the creatures in close proximity to human habitation.

Over the last few days, I enjoyed a pretty extensive tour of Northern New Jersey for business and personal reasons and was astounded by how many trees are down and how much damage they have caused. Everywhere I went, trees were uprooted, held up by those still standing, or stacked up, neatly or otherwise, where they have had to be cleared from roads, parking lots and yards. Snow traces straight lines on fallen trunks in the woods everywhere you look, and occasionally you'll see smashed garages or sheds, and blue tarps over the roofs of houses, some with new construction, others still awaiting repair. 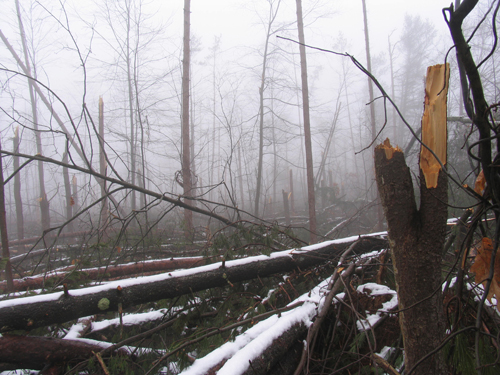 I covered a lot of ground from Friday to Sunday, and everywhere the prevalence of downed timber was more or less the same. My journey began with a westward trek on Rt. 78 from Manhattan to a stop near the junction of that highway and Interstate 287 near Warren. I then traveled up State Rt. 206 to Flanders, and then I-80 West and local roads to Blairstown, a little east of the Delaware River. Yesterday I took a train into New York and saw fallen trees all along the line, from Dover to the suburbs west of Newark. But the worst damage I saw was in and around Hopatcong on the eastern border of Sussex County, and in Oak Ridge, at the northern tip of Morris County — in the high territory bordering on Sussex and Passaic Counties, which is clustered with reservoirs serving the urban areas. 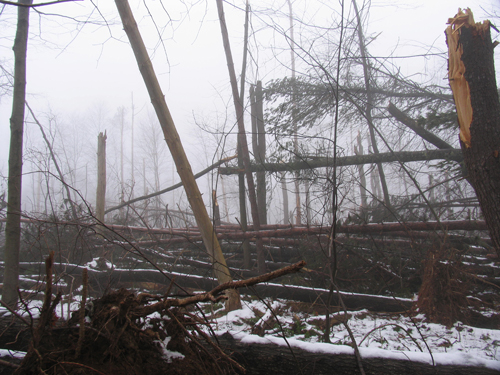