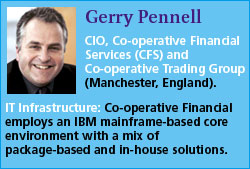 It is fitting that Gerry Pennell works for a company called Co-operative Financial Services. Even before he joined the Manchester, England-based company in 2003 and ascended to the role of CIO in August 2005, Pennell was an expert in making sure that different groups worked well together.

As a management consultant with PricewaterhouseCoopers (London), Pennell says, he led a number of post-merger integration programs for large financial services companies. Then, just prior to joining Co-operative Financial, Pennell became a member of the Manchester 2002 executive team, which oversaw the 17th Commonwealth Games, an Olympics-like competition for countries with current or historic ties to the British Empire.

As director of technology for the event, Pennell essentially was CIO for the games, which featured participants from more than 70 countries and territories, including Australia, England, India, Malaysia, Nigeria and Zimbabwe. "I was specifically responsible for results delivery overall and for all technology delivery ... and the software that managed the competitions in each venue," he recalls.

Pennell does not have to ensure that a single technology group works well with so many international markets in his current role with Co-operative Financial -- which differentiates itself based in part on social responsibility initiatives, such as emissions-conscious auto insurance -- but he has had to put his well-developed coordinating skills to use. As CIO of a company with a sizable banking arm as well as an insurance business (approximately $54 billion in total assets and long-term business), Pennell works to deliver value and high-level service to a diverse group of consumers. (Pennell also serves as CIO for Co-operative Trading Group, which has interests in retail grocery, travel and pharmacy businesses.)

One challenge in meeting those objectives, Pennell says, is completing "major legacy replacements initiatives" around some of Co-operative Financial's core business applications. "The key challenge will be to find a way of implementing them while not preventing tactical improvement activities and, of course, while keeping the business going," he explains.