50%
Tweet
By redefining his department as a strategic business partner, Grinnell Mutual CIO Dennis Mehmen has turned the carrier's IT organization into an innovator in the insurance space.

Now vice president of business information services and CIO of Grinnell Mutual Reinsurance Company (GMRC), Dennis Mehmen was helping the Grinnell, Iowa-based carrier improve its IT department before he was even on the payroll. A little more than a decade ago, GMRC ($394 million in gross 2006 premium) was in the midst of an automation project and Mehmen, who had just started working for a large insurance solutions vendor as a client manager, was assigned the account.

Mehmen's predecessors, he recalls, had not been up to the challenges GMRC had given to them, and the project was severely stalled. In fact, the GMRC project was widely considered the most difficult account in the vendor's portfolio, he adds. "They decided that the new guy should get the most disastrous project to start out with," Mehmen says. "The name of the project was System '92 -- I arrived at the software company in 1994 and they hadn't implemented anything into production yet." 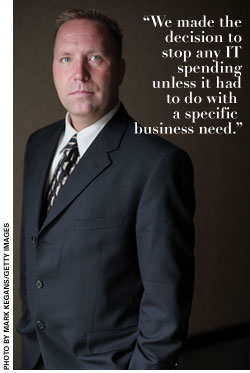 It was a large automation project, and both vendor and carrier lacked focus, Mehmen continues. "It was one of those things where they thought they could implement the whole thing at once, when it really needed a phased approach," he relates.

According to Mehmen, he quickly established a phased implementation plan and broke the project down into more easily managed steps. Within about six months, the team had implemented a couple of lines of business for one state and successfully expanded the project from there, he notes, adding that not long after, the project's turnaround grabbed the attention of the GMRC president, who offered Mehmen the carrier's CIO post.

Since accepting the position, Mehmen has brought the same focus to GMRC's 100-person IT department that he brought to the carrier's stalled automation project. By ushering in a "How will this help the business?" culture, he has turned GMRC's IT organization into a more responsive and effective partner for the rest of the enterprise.

"When I got here, I found out that we had all these great technologies and all this great equipment, but we were just buying it because it was new and cool," Mehmen remembers. "There was [technology/systems] replacement after replacement, but we weren't getting any business value out of it. So we made the decision to stop any IT spending unless it had to do with a specific business need."

Mehmen explains that classic "over the wall" communications between IT and the business slowed down initiatives and new projects. Expectations were muddled and results suffered, he says. With Mehmen's influence, however, the company has changed the dynamic between the business and IT and now considers IT more of a strategic partner.

"We're set up now so that [IT is] involved from the beginning. The development for a lot of the business ideas and most of the projects comes from a collaboration between IT and the business unit," Mehmen says. "There aren't many meetings that happen in this building [without] a representative from IT present."

Furthering the IT-as-strategic-partner culture at GMRC is the company's refusal to use the term "IT project." Business plans at Grinnell Mutual are developed a year in advance, and the resulting project suggestions are prioritized by the business with help from IT. "Most of the budgetary process has changed from equipment-based inventory to project-based," Mehmen explains. "A business plan is created and we look at that plan and determine the hardware and software needs and pretty much attach a [related IT] budget to the project."

As such, any technology initiative is known only as a business project. "There shouldn't be an IT project -- every project here is set with a business goal in mind," Mehmen continues. "We're at the forefront of knowing what the business needs are because we are involved in a lot of their business meetings and processes. It piggybacks on the development process. When the user gets the finished product they know what to expect. There isn't really any disappointment regarding under delivery because they're involved throughout the whole length of the project."

Having earned IT a seat at the table for a majority of business discussions, Mehmen says business acumen has become a valued skill for his IT personnel. Many of Grinnell Mutual's IT workers have prior experience in a business environment or have come from an insurance-related business, he says. "Most of the people that we have on staff have a nice mix of technology and business," Mehmen asserts.

That business knowledge, according to Mehmen, will become increasingly important as IT's role in insurance, and at GMRC more specifically, continues to evolve. "If you look back five years, most of IT's responsibility was just processing business," he relates. "A lot of the initiatives we're involved in now are communications links with our customers and our agents and really looking at where the company is going."

Going forward, Mehmen continues, he will be looking to enhance IT functionality related to major ease-of-doing business initiatives at GMRC. "A lot of our initiatives this year really have to do with that connectivity with our agents and our insureds," he says. "That's a big push right now." Disaster recovery also has become a major focus. GMRC recently developed a facility for the sole purpose of data recovery, according to Mehmen, and the carrier is looking into data mirroring and data relocation capabilities.

As a result of Grinnell Mutual's new disaster recovery vision, Mehmen says, source code ownership has become the deciding factor in many recent build-versus-buy decisions. "We want to have ownership over things like our policy, billing and claims systems," he notes. "We want to be able to change our main processing systems as much as we want to use those systems as leverage in our marketplace."

On a related front, Mehmen says that most development at GMRC is now done in Java and J2EE. While GMRC still does some processing in COBOL code, such work is dissipating quickly, he notes. As a result, staffing has become an important workforce issue for Mehmen. Hiring and retaining younger workers who are well versed in newer computer languages and technologies is a challenge, he concedes. "Our location isn't exactly ideal for a young, single person to come visit because we are in rural America. We're in a small town, and the metropolitan area is probably an hour away," Mehmen says. "It's hard to attract those young people and keep them."

To attract and retain younger IT professionals, Mehmen has leveraged his IT department's in-depth business involvement. In addition to those with strong local ties, Mehmen says, many young IT professionals at GMRC stay with the carrier because they appreciate being involved with the company's business units.

A young worker may land a job with a larger player in a more metropolitan area, Mehmen suggests, but that worker may also find him or herself in a cubicle coding for eight hours each day. "Our angle is that we like to get everyone involved in the process," Mehmen explains. "Here we like the programmer to come along with us, so that they hear what the vision of their project is, instead of just getting a spec document and going off that."

Position:Vice President of Business Information Services and Chief Information Officer, Grinnell Mutual Reinsurance Co.
Size of IT Organization: 100
Annual IT Budget: Between $15 million and $18 million
Career: After graduating from the University of Northern Iowa in the mid-1980s, Mehmen spent four years working his way up the programming ranks of a southern California-based auto insurer. Mehmen then spent time in the Northern Midwest and worked subsequent jobs at two insurance solutions vendors before signing on with Grinnell Mutual, where he has been CIO since 1996.
Pastimes/Hobbies: Now an avid golfer, Mehmen didn't learn to play until he joined Grinnell Mutual.
Fun Fact: Mehmen's favorite personal technology is an Archos, a small entertainment device with a 7-inch screen that he describes as a portable DVR.