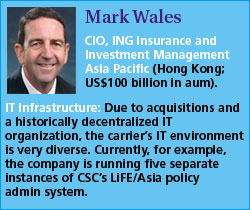 When the topic of role models comes up, Mark Wales says he's worked for several inspiring people, but he hesitates to identify any one mentor in particular. "Rather than being set by one individual, my views are formed from consolidating many of these," he explains.

In a way, that notion is indicative of Wales' accomplishments as CIO of Hong Kong-based ING Insurance and Investment Management Asia Pacific (more than US$100 billion in assets under management), an operation spanning 13 countries from the Middle East to Australia to Japan. In his four years in the CIO role, Wales has centralized and standardized a previously disparate IT organization -- not by replacing the local IT departments, but by leveraging the specific talents of each team and creating standards and consistencies across the entire group.

When Wales, born and raised in Sydney, Australia, first assumed the CIO role in April 2004 (he started with ING Australia in 2000), the company's IT operations were very decentralized, he relates. It was widely viewed that the regional IT function did not provide value to the enterprise, Wales adds. "My goal was to change this and provide a regional IT operation [that business units] would value and seek services from," he recalls. "I wanted them to see us as thought leaders and willingly follow our direction."

The carrier began seeing that value with one of the IT operation's first initiatives under Wales, an enterprise IT architecture project known as IA3. Developed by ING Insurance Americas, IA3 is an open, service-oriented architecture (SOA) designed to integrate disparate systems, according to Wales. "We believed if we could get the business units to adopt the same architecture and integrate their different applications in the same manner, then we would open the opportunity to reuse applications between business units," he explains.

Looking back, Wales calls the project a success. In fact, he notes, he and his team are working to accomodate business unit demands for architecture skills and component implementation.