50%
Tweet
Insurers are combining technological prowess with an improvisational spirit to address the superstorm's claims challenge.

This article was written by both Nathan Golia and Anthony O'Donnell.

For years, the prospect of a major hurricane hitting the New York City metropolitan area was on insurers' lists of possible -- but unlikely -- doomsday scenarios. In 2011, Tropical Storm Irene came ashore on Coney Island but didn't pack the punch of the most dire claims costs projections -- mostly because its devastation was concentrated in more sparsely populated upstate and inland areas. 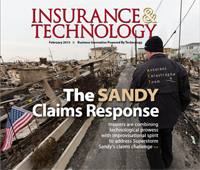 But shortly before Halloween last year, Hurricane Sandy trudged up the East Coast, merging with a nor'easter-style system to become Superstorm Sandy, the massive storm that slammed into the southern New Jersey shore and pushed a devastating storm surge into New York City, Long Island and northern New Jersey, affecting a swath of high-value insured property.

"The storm was unprecedented in terms of its size, total duration, population affected and the relatively high value of the property damaged," says Aite Group analyst and P&C claims expert Stephen Applebaum. "In fact, the dollar losses of inland marine property, such as personal pleasure craft and high-value fine art in flooded New York City galleries, are likely unprecedented from any single loss event."

Fitch estimated in an early January report that Sandy's insured losses will likely reach $20 billion, putting it in the top five biggest hurricane loss events of all time. While there are plenty of questions and initiatives to be addressed in the long term, the immediate challenge for P&C insurers is to effectively and fairly handle the nearly 1.5 million Sandy-related claims, says the Insurance Information Institute. What follows is an update on that effort, focusing on some of the major story lines that emerged from the daunting task of processing Sandy claims.

With power outages, gas shortages and debris making travel more difficult than normal, Progressive (Mayfield Village, Ohio; $1.3 billion in November 2012 revenue) had to scramble to set up shop, says catastrophe field response manager Brian Hill. The company staged 90 adjusters early on in Pittsburgh, then, after the storm passed, moved them into predetermined hotels along the Jersey shore.

Usually, insurance companies set up staging areas with mobile claims centers in an open space and have damaged cars brought to them. But with the lack of open space in the region, Progressive adjusters were forced to drive to each damaged car. That meant a lot of time in rental cars, which the company's logistics department helped turn into mobile offices.

"The scale of our mobile operations changed because of the amount of work we couldn't do in our staging areas," Hill says. "Typically we're able to send a bunch of tow trucks out to get cars to us, but instead we had to go out to them. So we had about 90 folks, and we pretty much equipped them all with mobile offices in their rental cars."

Those offices included company-issued power inverters, printers, cameras and extension cords distributed before they left Ohio. But getting the tools to the adjustment site wasn't the only challenge posed by an inability to work out of a staging area: There was also the matter of gas, which was hard to come by -- gas stations were out of power, their operators were unable to open them or gas deliveries were delayed, leading to very long gas lines around the region.

"We literally rented a gas truck and had it drive around to adjusters so they could fill up their cars," Hill says. "We also set gas drop zones in strategic locations."

Progressive estimated in December that its losses from Sandy could reach $90 million.

Deploying resources to a hurricane-affected area is challenge enough, but in the case of Superstorm Sandy, many Northeastern-domiciled insurers had to react from within the storm zone. The Branchville, N.J., headquarters of Selective Insurance Group ($1.5 billion in 2011 net written premium) is about 50 miles inland in the Appalachian northwest corner of the state. The carrier was far from Sandy's devastating storm surge, but like most of New Jersey's interior, it felt the storm's force as a wind event that downed trees over a vast area.

Selective needed to respond to the wind-related claims of policyholders affected by the storm in several states where the carrier writes personal and commercial lines policy. But Sandy was also a flood event for Selective, which is the sixth-largest writer for the National Flood Insurance Program, writing in all 50 states. To meet the claims demand, Selective's personal lines and flood insurance staff worked around the clock, seven days a week, for three weeks, says Gail Petersen, VP of corporate communications. In some cases, facilities staff used chain saws to clear fallen timber off roadways, and Selective provided food and shower facilities for employees who needed to stay long hours -- and even days -- at its Branchville office.

"We provided BlackBerrys to people who didn't normally have them, in case they needed to work from home," Petersen says. "Managers and volunteers capable of taking first notice of loss were given a checklist. Classrooms that we use for large meetings were equipped with computer and telecommunications equipment and filled nearly to capacity."

The reality of responding to a catastrophe is that adjusters who may normally handle 25 cases now have 85, Petersen notes. And dealing with those cases takes time. "An adjuster could be all day at a seriously damaged home, so we're trying to educate policyholders about the realities of claims while working as fast as we can," Petersen says.

Selective said in November that about two-thirds of the Sandy claims it expects to handle were in personal lines, with the rest in commercial lines.

Despite the challenging circumstances, Selective wasn't slowed by business continuity issues, says Rick Mohr, senior VP of enterprise technology services. Past experience with wind and rainstorms has made clear the threat of losing power, he says.

"Electrical power is key, and we focus on protecting our corporate data center, which is critical to everything we do in Branchville," Mohr says. "Telecommunications and systems availability are critical in servicing clients during a claims event."

Selective's data center has a built-in generator that can run the facility for a week. The company has a second generator capable of running its entire facility, including the data center, providing redundancy. It also has service agreements with fuel suppliers to keep reserves topped up.

Selective's data center is further hardened with a Sonet data ring, eliminating the risk of a single point of failure, Mohr says. Selective also briefed staff on call routing. "We have call center capability in both Branchville and Richmond, Va.," Mohr says. "We can reroute toll-free numbers, and if one location gets unduly burdened, we can redistribute calls accordingly."

Based on the Irene experience, Selective has aso engaged third parties to handle overflow calls, if necessary, and begun preparations for a unified communications system that will provide greater flexibility for both availability and call handling capabilities, Mohr says. "We operate in other regions, ... and with unified communications, you can potentially have someone working out of their home who would look to the claimant just like any agent working out of a call center," he says.