Many times, Elite 8 honorees are credited with turning around an insurance carrier's IT organization. But that's not the case for George Napoles, EVP, chief administrative officer and CIO at Jackson National Life ($80 billion in assets). Before Napoles joined the Lansing, Mich.-based insurer in 1995, there wasn't anything to turn around.

"When I arrived at Jackson there was no IT, in essence," Napoles explains. "It was all outsourced to EDS [Plano, Texas]. My charge was to build Jackson's IT from scratch."

Under Napoles leadership, Jackson has seen the maturation of its IT organization into a 510-person team with a penchant for churning out new products quickly and earning service accolades. The department's efficiency, Napoles says, allows Jackson to launch a new product every quarter. Meanwhile, the company's service centers consistently place among the top 5 percent of organizations in cross-industry surveys.

The biggest initial challenge in creating Jackson's IT department, Napoles recalls, was putting together a staff. "The most difficult problems that we had, by far, were in recruitment," he remembers, pointing out that IT professionals were in great demand in 1995. "It was the era of dot-com and Y2K. Those were highfliers in those days, and trying to recruit people to Lansing, Mich., to a firm that had really no reputation in IT whatsoever was a difficult endeavor." 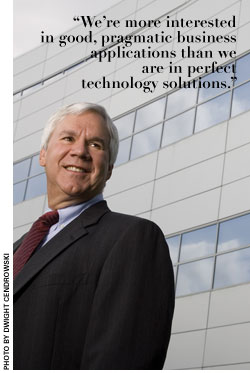 According to Napoles, he overcame those early difficulties by selling his newly formed IT group as an organization whose team members would be in on the ground floor of a rare opportunity. "They wanted to be a part of building something from the ground up," Napoles relates. "Good people relish a challenge. This was an opportunity to really build something that you've always dreamed about building -- with no encumbrances."

Napoles says he focused on recruiting only top talent. "My mantra has always been that I think good people like to work with good people," he says. "We focused not on quantity, but on quality of people. I think they liked the story. The people that we were looking for had some similar attributes. [They were] interested in what we were doing -- [undertaking] a very large challenge. [It was] an opportunity to actually contribute and build an organization."

So even when it was difficult to attract individuals to Lansing, the standards by which Napoles judged job candidates did not waiver. Potential hires were (and still are) required to take Jackson's programmers aptitude test (PAT) before they even interview for a job. Although he estimates that only 20 percent of applicants pass the PAT, Napoles does not believe the test has been a deterrent to hiring qualified individuals. "A lot of people have difficulty with the concept of the test," he admits. "But quite honestly, what we find is that those who are really competent kind of enjoy it because they like to demonstrate that they are competent."

For the select few who do pass, more testing and traditional interviews soon follow. "We are not reticent to ask very pointed and difficult technical questions to assess that they have the technology knowledge," Napoles comments. "We also explore if they have a history of accomplishment because we want people that are assertive and want to take ownership."

Overall, Napoles estimates that less than 10 percent of applicants who take the initial PAT actually receive a job offer. "It has not been a burden, I don't think, in turning off good people," Napoles says of the rigorous process. "It may be somewhat of a burden in discouraging those who are not as confident [in their abilities]."

With the team he has assembled, Napoles says, Jackson has become an industry leader with regard to speed to market. "If you look at each year and the products we've sold, about 80 percent of it comes from products that weren't there a year and a half previous. We're a machine churning out new products," he declares.

That speed, Napoles adds, can be attributed to his team, which is well-versed in the business side of insurance. He notes that many of Jackson's IT professionals are required to take LOMA's Fellow, Life Management Institute exams. In addition, while the members of Napoles' team are all technology-proficient, many do not have a traditional computer science background. In fact, Napoles himself broke into the business as an actuarial scientist.

"I learned the business first and IT second, and that instilled in me a belief that IT really is a tool for the business," Napoles says. "Technology is not the end result; it's a means to an end. So philosophically, although we insist that all our people are very technical, our purpose is to provide business functions."

Napoles also credits a "good enough, not perfect" technology philosophy within IT as having helped Jackson maintain its strong speed-to-market position. His shop is well-stocked in effective technology -- such as CSC's (El Segundo, Calif.) Vantage-One and CyberLife systems for administration and IBM's (Armonk, N.Y.) FileNet for imaging -- but Napoles says the group is careful not to over pursue technological advancement.

While the good-enough-not-perfect approach applies to Napoles' technology adoption, it's not applicable when it comes to customer service. He stresses that Jackson's IT team is constantly looking for new ways to improve its service levels.

Going forward, however, Jackson will not be resting on its service laurels. "We want to stay a top call center, and we recognize that other companies are not standing still," Napoles says. In the next few years, he adds, he expects to see a near-revolutionary service transformation take place within the industry, with a big push from the new rules-based and call center technologies that are maturing in the marketplace.

It's no coincidence then that Jackson is in the midst of implementing a robust rules engine into its processing environment. "Our mantra here is not, 'If it ain't broke, don't fix it.' If you feel that way, we don't want you to work for Jackson," Napoles explains. "We believe it's broken everyday, and much of what we do are whiteboard sessions, continually trying to find ways to make Jackson more efficient with better service."

Position: Executive Vice President, Chief Information Officer and Chief Administrative Officer, Jackson National Life
Size of IT Staff: 510
Annual IT Budget: $69 million
Career: Before joining Jackson National Life in 1995, Napoles was president and CEO of Cooperative Technologies. He also spent time with SunAmerica and USLife Systems, where he was a senior vice president. Management Philosophy: Napoles describes his management style as "common sense." He says he believes in pragmatic, creative solutions and that an individual's success is based largely on his or her ability to select good people. Pastimes/Hobbies: Napoles enjoys sailing. He's also an avid sports fan and takes Saturday trips to Michigan State and Notre Dame (where his daughter is a student) whenever possible during the college football season. "My whole life, my favorite team on Saturday was the team that was playing Notre Dame," Napoles laughs. "But you have to root for your daughter's school."
Fun Fact:Napoles still likes to write computer programs in his spare time.