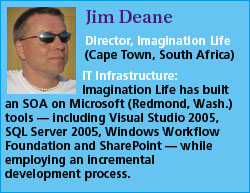 While the official titles of 2008's "Elite 8 International" honorees vary, most make it clear that the executives are the de facto CIOs of their respective organizations. But for Cape Town, South Africa-based Imagination Life's Jim Deane, that isn't exactly the case.

"Generally, we do not use titles," Deane says of himself and the three other Imagination Life shareholders -- the company also is partly owned by Cape Town-based Sekunjalo Group (US$58 million in annual revenue) -- a start-up financial services provider that aims to meet the needs of the poorer segments of South Africa's population with life insurance, savings and pension plans. "Rather, we just refer to ourselves as directors."

But make no mistake about it -- Deane is the head of IT at Imagination Life, and since helping found the company in 2004, he has led the carrier's maturation into an agile technology operation, free of the legacy systems that populate many of South Africa's financial services firms. In fact, Deane notes, Imagination Life's technology platform has drawn interest from other organizations.

Deane says Imagination Life's relatively small size -- it is a 65-person operation -- lends itself to a flat management structure in which the carrier's four directors share responsibilities. So while Deane is the company's de facto CIO, he also is heavily involved in financial services product and process design.

The collaborative nature of Imagination Life's directorial roles is indicative of the insurer's IT organization as well. "There are no hard divisions between the business and IT," Deane stresses.

That effort is integral to the insurer's growth as a business and as an IT operation. "[It] enables us to ensure that the business is planning along with IT to launch products for which functionality will be available," Deane relates.