50%
Tweet
At the Insurance & Technology Summit, insurers shared real-world examples of innovation and adaptation in an increasingly digital world.

It turns out that “innovate” wasn’t a word coined by tech writers and marketers in the early 1990s. Attendees of Insurance & Technology’s 2014 Executive Summit, held this past week in Bal Harbour, Fla., learned during a workshop led by X by 2’s Frank Petersmark that the word had its origins in the 1600s, before entering wide use in the French Enlightenment.

However, early use of “innovate” was pejorative, Petersmark explained. The world at large -- especially aristocracies -- were more conservative about change, and new ways of doing things were seen as dangerous.

That attitude has been ascribed to many insurance companies here in the 21st century. The insurance industry is often described as a laggard in adopting new technology. But companies have learned from the eventual fate of the French aristocracy and are staving off the guillotine (metaphorically speaking, of course) by embracing the promise of technology to enhance the sector’s risk management and mitigation DNA.

Just check out this graphic from Ajoy Kodali, Humana’s EVP of IT administration, who gave the Summit’s opening keynote: 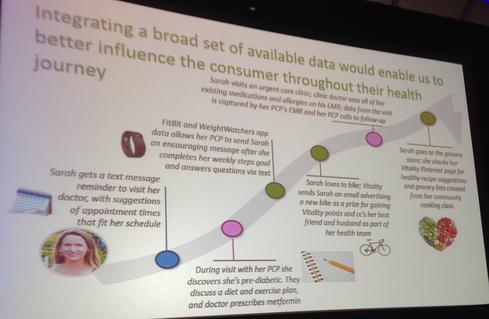 Petersmark talked about “imagining a future state” as a key to creating an innovative culture in his workshop -- and Humana is doing just that. The envisioned path of a future Humana customer, which includes several touchpoints and interactions across devices and networks, is likely to be reality sooner than one may think, as the increasingly connected consumer becomes more comfortable with sharing his or her personal data with companies of all times.

Closing keynoter Chris Watkins of Direct General identified several technologies that weren’t widespread or even invented when the company kicked off its famous kiosk initiative about this time last year, technologies that will transform how consumers expect to interact with the machines. Just from one company, Watkins noted, Apple Pay and iBeacon offer new angles of interaction with a large installed base. Luckily, Direct General designed its kiosks with expansion capabilities, both to integrate at-the-time unknown technologies and to refine the tech already in them when necessary. Watkins said that facial recognition analytics, for example, can allow Direct General to reach out directly to customers who might be having trouble paying a bill or binding a quote for some reason.

These and other examples show that insurers are making real strides in adapting to 21st century standards of customer interaction. Who knows what we could see by the 2015 Summit?