50%
Tweet
From personal experience, I've long known that insurance fraud was what might be called a "burning issue" for insurers and society at large, so it is perhaps appropriate that Mercury Insurance should torch a car — and send us a pretty awesome image — to call attention to the problem.

In the "some guys have all the fun" category, some folks at Mercury Insurance torched a car earlier this week to call attention to auto insurance fraud and provide an opportunity for study. The car was torched at the St. Petersburg Fire Training Academy and was then used at a three-day clinic in which Mercury Special Investigations Unit (SIU) investigators and law enforcement learned how to inspect cars for possible fraud.

“Insurance fraud is not a victimless crime,” comments Ray Gomes, Mercury’s SIU manager in Florida. “These types of rip-offs annually cost families an average of $400 - $700 in increased premiums.”

Florida ranks first nationally in most staged auto accidents, with Tampa, Miami and Orlando currently placing in the top-five, according to a statement from Mercury. The Insurance Information Institute estimates that auto insurance fraud will cost Floridian auto policyholders up to $1 billion in 2012.

“Florida is a hotbed for auto insurance fraud, and oftentimes it’s very difficult to detect,” adds Gomes, a former regional vice commander of the Air Force Office of Special Investigations. “There are some telltale signs, however, and we wanted fellow investigators and law enforcement personnel to be able to identify them. This is why we burned a car to the ground and then worked with local investigators to help them identify arson-related fraud.

“Seminars like this provide up-to-date information about auto insurance trends and scams, as well as hands-on experience that can be used in the field during investigations,” Gomes asserts.

Insurance fraud of all sorts costs an estimated total of about $40 billion annually in the U.S., according to the FBI. It also results in many of the problems that insurers have with the general public, who tend not to understand insurers motives for being cautious about claims. Not that there aren't abuses, and not that tangling with insurers' corporate lawyers is likely to enhance brand reputation, but more than nine times out of 10 when I've seen media coverage about denied or inadequate claims there is no mention of the problem of fraud. 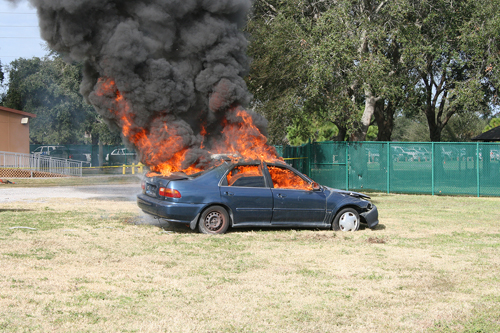 It seems hard to believe that someone would go to the lengths of destroying a car for the sake of an insurance claim, but I suppose I shouldn't be surprised. In my late adolescence someone I knew did just that. He was someone that came in and went out of my life fairly quickly and was more a friend-of-a-friend than a friend proper. Ironically, he was the brother of a senior law enforcement officer in my town. He was also — not to put too fine a point on it — an amoral scumbag. To commit the crime in question, he parked his car in the woods, doused it in gasoline and set it alight. Or so he told us. His reason for committing the crime was that he was going on a tour of duty in some branch of service and didn't want to be burdened by the payments. I'm proud to say that I was horrified that he would consider this solution to his financial challenge.

Much "hard fraud" is no doubt committed from similarly amoral motives, though by professionals rather than the amateurs inclined to brag about sticking it to "the man" or getting away with something that actually burdens everyone else. It's important that word gets out about this kind of fraud as well as the one-off cases of hard fraud that might be inspired in part by rationalization but also excused or ignored because of unjustified animus towards insurance companies. It's a vicious cycle that makes insurers more skeptical, resulting in worse relations with policyholders and the public at large. To address it, insurers need to do a better job of explaining their socially beneficial role (and of fulfilling it, for that matter) and publicizing the enormous economic cost of fraud. Soft fraud is something we've all come across, one way or another, but I'll leave that subject for another day.

Getting back to our original topic, rumors that Mercury's insurance professionals will drop watermelons, TVs and full beer kegs from several stories to study the insurance implications have not been substantiated. No word yet from my Mercury contact on which competitor insured the car that was torched.