50%
Tweet
During his 11-year tenure as head of Mutual of Omaha's technology organization, Jim Hanson has driven increasingly greater efficiency and ease of use, and has even launched a revenue-producing subsidiary.

In an era when CIOs' tenures have been notoriously short-lived, Jim Hanson has led Mutual of Omaha's ($4.2 billion in 2006 revenues) technology organization for more than a decade. The Nebraska native has weathered the challenges of both changing technology and a changing business climate, delivering solutions that exemplify increasing simplicity and customer friendliness. And not only has Hanson achieved the increased efficiency demanded of CIOs everywhere today -- overall IT expenditures at Mutual have decreased by 19 percent from 2004 to 2007 -- he also has played a leading role in launching the Omaha-based carrier's revenue-producing subsidiary, Continuum Worldwide, which provides IT services to other companies.

Key to Hanson's success as EVP of information services at Mutual of Omaha has been his technology strategy. As new technologies became available over the years, Hanson says he has always been alert to their potential. But he has always focused on the right solution rather than the newest one, and sees change as being more evolutionary than revolutionary.

In that spirit, Hanson's IT organization has been both cautious and eclectic in its adoption of newer technologies. "What we've been trying to do is make sure that we use technologies in the right areas and not take a one-size-fits-all approach," Hanson relates. "We look for what fits the problem we're trying to solve." 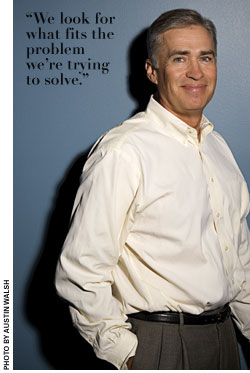 For example, "In the 1990s we made a big push into imaging/workflow, client/server technologies. But with administration systems, the perspective we took was, 'Let's look at the return on dollars spent,'" Hanson continues. "In some areas, such as closed books of business, it didn't make sense to replace legacy systems, so a key part of what we've done is to recognize the value of each component, look for opportunities where we can extract rules and make things more accessible for our customer base."

By 2000 Hanson had formalized Mutual's prudent approach by implementing the corporation's first project management office. He also developed a technology cycle for monitoring new technologies and their potential, which included a complementary evaluation process for the sunsetting of older technologies.

Since 2004 Hanson says his organization has been focused on a services-oriented architecture (SOA) initiative aimed at enabling distribution of group and individual products through multiple channels. "A number of secured Web services have been enabled to connect to partner sites to enable us to sell insurance products and annuities over the Web," he explains. "Applications for insurance can now be submitted through Web services while other Web services and [Minneapolis-based Fair Isaac's Blaze] rules engine help us underwrite the policies."

Hanson adds that Mutual of Omaha is planning to use a similar approach with other business, including simplified life products. "This frees up underwriters to handle our growing business that requires underwriting," he says.

As a result of the SOA/Web services initiative, Mutual of Omaha -- whose lines of business include group and individual life, annuities, health, dental, supplemental insurance, long-term care and investment products -- now can underwrite 20 percent of Medicare supplement business automatically, which has reduced the cost of doing business and helped to increase sales, according to Hanson.

The ease-of-doing-business advances build upon Mutual's agent/broker portal initiative, which used IBM (Armonk, N.Y.) WebSphere technology to replace multiple Web sites with a single, personalized, role-based site for agents and brokers to access forms and information about products and get updates on application status, Hanson says. He notes that components created as part of the project have been reused within other Mutual of Omaha projects.

The portal already has increased service for distributors substantially since it went live in 2005, and more functionality is due to be released for both agents and brokers this year and during 2008, including enhanced agent compensation reporting and management, integration with contact management systems and pending-status reporting enhancements, according to Hanson. "Previously the only way to access some of this information was to call Mutual of Omaha," he says.

Hanson's IT organization delivered similar efficiencies with a series of document management initiatives, starting in 2005 with the rollout of the carrier's group health proposal-generation system. Built on Document Sciences' (Carlsbad, Calif.) xPression solution, the system improves tremendously on both the speed and quality of proposal generation when compared to the previous system, which was developed using Microsoft (Redmond, Wash.) Word and Visual Basic for Applications scripts, according to Hanson.

Mutual also has used xPression to generate product- and state-specific producer welcome packets automatically for newly approved agents. Hanson says that the carrier's producer services area has saved time and money by automatically printing and shipping these packets rather than manually assembling them from preprinted documents and printing an attached cover letter.

The carrier also is rolling out its "eCorr" correspondence system, replacing a Word and Visual Basic system in place today, which will enable more data to be merged into letters, according to Hanson. The first set of letters sent on the system, due to go live in September, will be generated in just three minutes rather than the 45 minutes it required previously, he relates.

In addition to deploying more-efficient systems, Hanson has looked to leverage scale. He notes that his organization was able to make the most of the divestiture of Mutual's P&C business in 2003 and the opportunity it provided to extract the expense of aging legacy systems. But as the carrier continues to grow in its traditional product lines it has been able to take advantage of increasing scale, according to Hanson. "I'm not adding a lot more application staff every time we add another 100 policies around a particular product line," he says.

In order to maximize the effects of scale, Hanson relates, he has sought to benchmark his organization over the past several years. "For me the acid test has been alignment of our services with those we can purchase externally, and so in the past year we bid a number of our infrastructure services out and had our internal arm bid on the services as well," he says. "In most cases we were very competitive. But in some we were not, so we made a determination as to whether or not we could bring our services in line pricewise. If we couldn't, we looked at sourcing."

Hanson's benchmarking initiatives dovetailed with capabilities related to a program launched in 1998 to consolidate technology enterprisewide. In the years that followed, Mutual developed capabilities in which other companies became interested. Once it was clear that external provision of services was a viable business opportunity for Mutual, the carrier launched Continuum Worldwide in 2006. The subsidiary currently has 21 clients and annual revenues of $4.4 million. "We're still a small firm, but we're building out using the processes and capabilities we've grown in-house," Hanson says. "That provides yet more scale, which, in addition to the business opportunity, will hopefully help to reduce some of the cost to my internal business areas."

Position: Executive Vice President, Information Services, Mutual of Omaha
Size of IT Organization: 650
Annual IT Budget: $110 million.
Career at Mutual of Omaha: Hanson joined Mutual of Omaha in 1978 as a programmer. In 1982, he left Mutual for a personal business venture and returned in 1984. Hanson was named manager of information services in 1989, first vice president in 1994 and VP in 1995. He assumed his current position in August 1996.
Management Philosophy: "Get the right people in the right jobs and let them run."
Hobbies/Pastimes: Although Hanson has run the Boston Marathon, he says that these days, "It's probably more descriptive to call it 'jogging.'" Hanson also enjoys golf and is a licensed pilot. He hopes to earn his instrument rating in the near future.
Fun fact:Using skills acquired during his rural upbringing, Hanson was a rodeo rider for a time.

Transparent Technology
During his tenure, Hanson has been able to update the organization's legacy systems with new technologies while making the resulting IT environment appear seamless to the company's internal and external customers.

Foundation for Growth
Mutual of Omaha expands its product offerings to include life, AD∓D and disability with the help of SunGard's COMPASS administration solution.