50%
Tweet
Jeff Stoll has led MetLife's Individual Business Systems division through M&A, legacy consolidation and modernization efforts of a magnitude equal to any the industry has ever seen.
Click here to listen to podcast
Sponsored by IBM

Before Jeff Stoll arrived at MetLife in 2000, he'd occupied senior technology leadership positions at Chase Manhattan Bank (New York) and had been CIO of both Kemper Insurance (Long Grove, Ill.) and AIG's (New York) Domestic Brokerage Group. A lesser mortal might have seen fit to rest on his laurels, but Stoll plunged into a senior assignment at one of the world's largest insurance companies at the moment it was making the transition from mutual company to a publicly traded entity. As a result, he shouldered responsibility for some of the industry's most challenging technology projects in recent years.

The first originated in a challenge from business executives in MetLife's Individual Business (IB) division in early 2000 to identify ways to reduce cost and gain efficiencies. It was a daunting assignment for more than one reason. First, efforts to consolidate systems had not been successful in the recent past. Second, while Stoll requested four months to study the existing systems portfolio, leadership argued that it needed to be done in six weeks. "You can guess who won that battle," quips Stoll.

The ensuing ProjectLESS consolidation plan identified 53 legacy systems that could be eliminated. In order to get business leadership behind the plan, Stoll says, he and his boss, then IB CIO Tony Candito, convinced IB senior management that "this will simplify our environment. The returns are going to be great."

The challenge for Stoll's team was to complete the project within a 12- to 15-month time frame. That required identifying subject matter experts, ensuring business support through ongoing communication, and instituting a highly structured and dedicated project management office (PMO), according to Stoll.

Stoll reports that his team completed ProjectLESS within the allotted time, resulting in a reduction of more than $10 million in systems maintenance costs the following year, covering the project outlay. Considering that past attempts were more expensive and failed to reach their objectives, he adds, "It was a big win for the company, and for us."

Shortly after, Stoll was named CIO of IB. In that capacity he runs an organization of 970 people spread over nine domestic locations and another 400-plus consultants, both onshore and offshore. He also is responsible for all of MetLife's customer response centers and provides systems support for the Enterprise Compliance and Privacy Office.

That appointment led to one of the greatest challenges of Stoll's career, with MetLife's $11.8 billion acquisition of Travelers Life & Annuity in 2005. Since the acquisition was fundamentally "a play on increasing our independent distribution group," Stoll says, the brunt of the work fell within IB. "For my group, integration was defined as all Travelers new business processes being on MetLife's strategic platforms and products for both life and annuities," he relates, adding that among the related tasks were changing the company name on 92 applications with more than 10,000 electronically generated forms and updating producer parameters on each service system.

On Jan. 30, 2005, as MetLife prepared to pull the trigger on what proved to be the biggest insurance deal of the year, the company's business leadership consulted with IT. Following the pattern of ProjectLESS, the two months Stoll estimated was necessary for due diligence was limited to one. But the worst was still to come. The deal close was scheduled for July 1, meaning that until then MetLife couldn't have access to any of Travelers' proprietary or customer data. Despite that, IT would have to position itself to make a massive corporate systems interface on that date and be able to achieve full integration by Nov. 1 in order to meet financial, corporate and regulatory deadlines. "When I first heard that, my heart sank," Stoll recollects. "It was unheard of."

What IB had learned from ProjectLESS proved invaluable. But in addition to resurrecting the ProjectLESS structure and processes, Stoll believes that the application of what he calls the "24-hour rule" to address problems with integration project objectives was a major success factor. "Given the time we planned for getting things done, if a project team had an issue that could not be resolved within 24 hours, it was immediately escalated to IB IT -- my organization -- or to IB IT senior management, meaning me personally," he explains. "From there, if necessary, we would go directly to my counterparts in business and address the problem through the PIMO [Program Integration Management Office]."

Though the integration was completed successfully by Nov.1, 2005, by Stoll's account the pressure of work during 2006 has been at least as intense. A major reason for that is that the carrier's new emphasis on independent distribution marked the beginning of a reorientation that must be undertaken in parallel to continuing systems consolidation and modernization work, according to Stoll. "Independent distribution has a set of service and business requirements that are significantly more demanding than those of the traditional career agent channel," he explains. "This affects ongoing demand for enhancements and architecture changes, because speed to market and service become critical." It is no longer a case of the business saying, "We'd like to do this," Stoll adds. "It's the independent distributor saying, 'If I don't get this, I'll go elsewhere.'"

In addition to continuing to evolve strategic platforms, Stoll began an initiative early this year to improve the strategic acumen of the organization as a whole. Rather than increase technology investment, Stoll says, "We can produce a lot more within the cost structure we have." That objective, he notes, led to assigning some of his organization's top performers to find the means to improve in five strategic areas: time and cost to market, total cost of ownership, the project requirements process, data simplification, continuous (i.e., nonbatch) processing and productivity improvements.

In driving his team members to new levels of excellence, Stoll says he is influenced by the example of MetLife's former chairman, Bob Benmosche. "Bob's respect for people set the standard for me," he says. "I'm hard driving, demanding and results oriented, but I'm very open, direct and very fair."

Stoll sees employee development and review as not something done strictly by appointment once or twice a year, but as an ongoing part of management. "Everyone should know where they stand in terms of performance, and I believe that as a manager I have an obligation not just to my direct reports, but throughout the organization to let people know how they're doing and to communicate on a regular basis," he says. 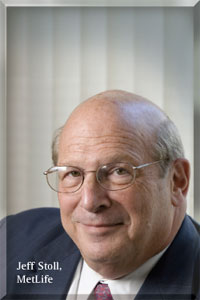 Affiliations: Stoll is a member of ACORD's (Pearl River, N.Y.) board of directors. "Involvements such as these are sometimes looked at as being purely honorific, but I'm very involved in and committed to ACORD because it gives me the opportunity to do something that I strongly believe in," he says.