50%
Tweet
Political transition in Somalia offers faint hope that pirate ransom will cease to be a cost of doing business for marine insurance clients for some time to come.

The term "pirate financiers" may seems like a metaphor from the 1980s, but investors in actual piracy are thriving, according to a report from global insurance broker Willis Group (London). In his new report, "The Future of Piracy in a New Somalia," author Tim Holt suggests that the East African country's piracy industry is evolving in a way favorable to those who bankroll it.

Holt, who is Willis Group's Head of Intelligence at Special Contingency Risks (SCR), characterizes Somali piracy as a $200 million business, making it the country's second largest generator of income — leaving us all to wonder what other industry in the failed East African state could rival those revenues. Holt places the analysis in a political context, describing piracy as a growth industry as the country "stumbles" through its biggest political transition since the Siad Barre regime, which was overthrown by factions led by warlord Mohamed Farrah Aidid:

As pirate financiers invest more and more in the success of their operations, lucrative opportunities for local business have vastly expanded. A $4 million ransom will be injected back into the local economy, benefiting a community that once lived in abject poverty. There is little wonder why the practice has boomed when Somali per capita income is $600 and a minimum $10,000 is available for each perpetrator of a successful operation. With 90% of the world’s trade is transported by sea, the opportunities are vast.

If pirates are hostis humani generis — or enemies of humanity, as Roman law designated them, it doesn't appear to feel that way to the industry's biggest operations. Business remains brisk for the country's two main pirate syndicates, who show "little sign of disarray," according to Holt.

"They have not had to shift anchorages and have the funds to consolidate their hold on it as necessary," he comments. 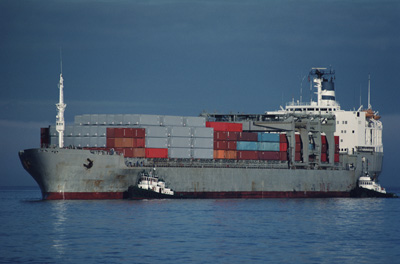 Somalia's pirates are prudently allocating their capital in diversification, Holt relates. He reports a recent acceleration in kidnap for ransom targeted at aid workers and tourists, and he says that some have begun to offer "counter piracy" and "negotiation" consultant services.

Those concerned with the ongoing economic and human cost of Somali piracy — marine insurers, in particular — will simply have to continue a policy of damage control "until the new government is able to ensure its internal stability," Holt concedes. Prospects for that desired event do not seem especially favorable. Holt cites a recent U.N. report:

“Under the Transitional Federal Institutions, the systematic misappropriation, embezzlement and outright theft of public resources have essentially become a system of governance.”

In the meantime, Holt floats the idea of offering competing incentives to Somalis:

In order to tackle the problem effectively, the government would have to implement a strategy that does not solely rely on force. Communities must be presented with the opportunity to earn a wage that offers them a similar quality of life to what they currently experience. It may initiate this by a sustained investment campaign into the country’s economic infrastructure to kick-start primary sector business. Before this can happen the new government needs to establish a reliable, transparent mechanism for aid disbursement, something that will not happen overnight.

It seems safe to say that pirate ransom will be a cost of business for shipping companies and marine insurers for some time to come.