50%
Tweet
Joan Zerkovich brought decisive leadership and a background in distributed computing and Web-based technology to the tech transformation of catastrophe insurance start-up ICAT.
Click here to listen to podcast
Sponsored by IBM

Since Joan Zerkovich joined Boulder, Colo.-based International Catastrophe Insurance Managers LLC (ICAT; more than $200 million in gross written premium) in 1999 as an underwriting manager a year after it was launched, the technology transformation she has driven has helped the company evolve from an ambitious start-up to an established player in the catastrophe insurance market. Since technology is at the core of the company's business plan, Zerkovich's contribution was indispensable -- and it is remarkable, given that she came to the job without any prior experience in the industry.

Like other CIOs who have come to insurance from outside the industry, Zerkovich faced an arduous challenge in learning the business. But her unfamiliarity with the industry, she says, brought certain advantages to the job of recasting ICAT's technology. "Because of my prior professional experience, I was not drawn to the use of the mainframe systems prevalent in the industry," Zerkovich comments. "Instead, we built key components with design criteria that emphasized Web-based applications using relational databases and real-time data exchanges between systems over the network."

Before joining ICAT, Zerkovich was technical director for the California Digital Library and director of distributed computing analysis and support for the University of California. The University hired her in 1986, just as she was finishing her M.B.A. program with an emphasis on technology, and gave her a network administration job whose responsibilities included work on the construction of National Science Foundation's NSFnet, a precursor to the Internet.

In answer to a personal request, Zerkovich agreed to help ICAT recruit a CIO to get the carrier on a firm technology foundation, and ended up staying on for a more prolonged consulting engagement. The company needed to overcome a problem with a key technology partner and was seeking someone who could institute the necessary measure of vendor and project management to make the relationship work. "Unfortunately, what I discovered was that the partner was fundamentally unprepared to deliver the solutions ICAT had asked for," she recalls. "I went to the executive team and explained that we needed to sever our ties with the partner and probably bring development in-house."

ICAT offered Zerkovich the opportunity to take leadership of that development herself, as CIO, and build a technology team that could meet the company's needs. The assignment was especially challenging, owing to the uniqueness of the company's product, according to Zerkovich. "Our product was completely proprietary, highly customized catastrophe insurance, using unique algorithms that you would not find in the industry or through ISO [Jersey City, N.J.]," she says.

Since standard insurance systems didn't align with ICAT's product -- and since the company was functioning simultaneously as general agent to carriers and as an underwriter -- beginning in 2000, Zerkovich's team began developing a full range of insurance applications from scratch, including sales, policy admin, accounting and reporting systems, in addition to those typically found in an agency management system. Circumstances required Zerkovich to learn about both catastrophe insurance and the industry in general quickly, but they also drove close alignment of technology and business. "We were sitting side by side with underwriters and executives, learning about the industry and our products, and developing what we needed pretty much just in time," she says.

Circumstances also dictated building on a Macromedia (now San Jose, Calif.-based Adobe) ColdFusion-based development platform put in place by the aforementioned vendor. "Our focus was less on technology and all about getting products to market; we concentrated on releasing state products in the form of Web-based applications every six to eight weeks," Zerkovich relates. "We focused on minimal policy administration functionality facing inward to ICAT and put more effort in the application that faced our producers so that we could generate business and develop products as rapidly as possible."

As the business developed, and ICAT underwriters and product analysts made advances in the products, the existing development platform became a hindrance, according to Zerkovich. "Our business plan called for rapid expansion over the ensuing three years, and I thought that it would challenge the scalability of the platform," she recounts. "Because newer, more sophisticated products would require a major development effort, we decided to put them on a new platform from the start."

In 2004, ICAT selected Java and Oracle (Redwood Shores, Calif.) as the framework for its new platform. The carrier structured the platform such that the user interface was somewhat decoupled from ICAT's business rules and data management, and in the way it interacted with other applications, according to Zerkovich.

The new platform enabled ICAT to rapidly implement Guidewire's (San Mateo, Calif.) ClaimCenter claims system, customizing and integrating the Java- and Oracle-based solution with ICAT's other systems using newer technologies, including Web services, relates Zerkovich. The implementation was seen as critical, in light of the record 2004 hurricane season. "Their traditional development schedule was about 18 months," says Zerkovich. "We had three months to get it done and were operational by June 1, 2005."

Zerkovich's organization followed up with a similar customization and Web services integration of a new policy admin system, based on an FJA-US (New York) offering, completed in about 18 months. "The FJA-US product enables our underwriters to go directly into a product development environment and to develop the rating algorithms and underwriting rules without programmers involved in that process," Zerkovich explains. "That's been a huge benefit to ICAT in terms of getting products to market."

As an example of the speed afforded by ICAT's systems transformation, Zerkovich cites a recent request from the Florida Joint Underwriting Authority for a new product -- which the carrier was able to develop within two weeks. According to Zerkovich, the new systems also have ensured the transition from a new company with a very simple product operating on a relatively small scale, to a higher-volume company with a very complex product operating in a changed catastrophe market landscape. "Because of the size of that market now, it's difficult to work with a single partner," she relates. "The new systems have given us the flexibility to deal with multiple partners." 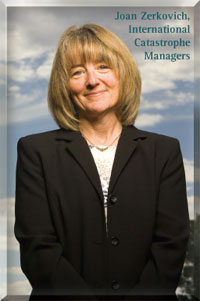 Career: Zerkovich was hired as a network administrator by the University of California, Davis, in 1986 as she was finishing her M.B.A. In that position, she participated in the creation of Internet precursor NSFnet. Through that involvement she took on the position of cochairperson of the Bay Area Regional Research Network, the Northern California NSFnet branch. Before joining ICAT in 1999, she was technical director for the California Digital Library and director of distributed computing analysis and support for the University of California.

Management Philosophy: Zerkovich says she takes a hands-off approach, allowing her staff to bring their expertise to bear on ICAT's problems, and fostering their contribution through regular meetings with key leaders. Her first principle of management, Zerkovich says, is: "Hire staff that are smarter than you are and listen to them."

Affiliations: Zerkovich is a board member of the Boulder County YWCA.