50%
Tweet
The selection of a package for a massive volume of business settles rather than opens the question about the industry's technological direction.

Nationwide Insurance’s selection of Guidewire's PolicyCenter could be seen — with apologies Neil Armstrong — as one giant leap for an insurer, one small step for the insurance industry. It is, after all, one initiative, however significant, that is only now beginning. However, it’s probably closer to the truth to say that Nationwide’s decision to put about $9 billion worth of business on a package system provides validation for other carriers to move in the direction toward more modern technology, which in turn has broad implications for the insurance core system market.

The first thing to acknowledge about Nationwide's decision is that it was not that it was an absolute first in any respect other than the magnitude of the implementation. Other Tier Ones have implemented configurable policy administration and other core systems. In that regard, the Nationwide PolicyCenter initiative is just the latest. However, the sheer scale of the project shows that size no longer matters.

A few years ago, the type of technology adopted was dependent on the size of the company, according to Andy Scurto, president of ISCS (San Jose, Calif.). Tier 1 insurers with sizable IT departments took best-of-breed approaches, while Tier 2 looked to enterprise suites, he asserts. "Technology has advanced to the point that company size is no longer the driving factor for selection of technology to handle core administration needs," he says. "Today, functionality and the ability of the technology to an advance an insurers's business needs into new products, geographic regions or lines of business have far more impact on selection than simply size or budget."

Andy Scurto, ISCS
Nationwide's decision exemplifies larger companies recognizing that customization or significant in-house development of policy administration capabilities is no longer a productive route supporting differentiation, Scurto suggests. "By fully utilizing the functionality and capabilities of an enterprise suite for core administration right out of the box, larger insurers can concentrate on exploration and implementation of emerging technologies that do drive competitive advantage, such as telematics, analytics and UBI," he elaborates. "And they can be assured of an easy upgrade or transition path to new core system technologies in the future, since their suite is being enhanced and enriched by their core system vendor."

By recognizing where the carrier needed to be unique and where it as better served by vendor-provided technology, Nationwide has affirmed that the relevant point about policy administration capabilities is how they are the same, according to Karen Furtado, of Boston-based SMA. "Policy by itself is not the differentiator; it's what wraps around it that differentiates an insurer," she comments. "There has been a desire for technology that would support implementing the same base functionality, and now carriers are beginning to acknowledge that the technology is available to meet that desire."

As the insurance industry recognizes that package systems can deliver commodity core system functionality, they must focus their selection efforts on differentiators on how different vendors can deliver those capabilities depending on factors such as cultural alignment, execution capability and implementation model, counsels Bruce Broussard, VP of Hartford-based Insurity. "Insurers now have a much broader set of options than ever to fulfill the promise that they no longer need be dependent on their own proprietary technical capabilities to support their business model," he says. "They can use their IT staff to differentiate their company and consider any number of vendors to provide non-differentiating technical capability, thus lowering their total cost of ownership and avoiding wasting their resources on things that are redundant and unavoidable in the industry."

The Nationwide decision may represents a kind of tipping point for a trend already well attested, suggests Catherine Stagg-Macey senior VP, Celent. "This trend is well underway," she reports. "Fifty percent of respondents in our research say that they are well into their legacy modernization programs on both sides of the Atlantic, and another 25 percent are in the early stages." (See chart below.) 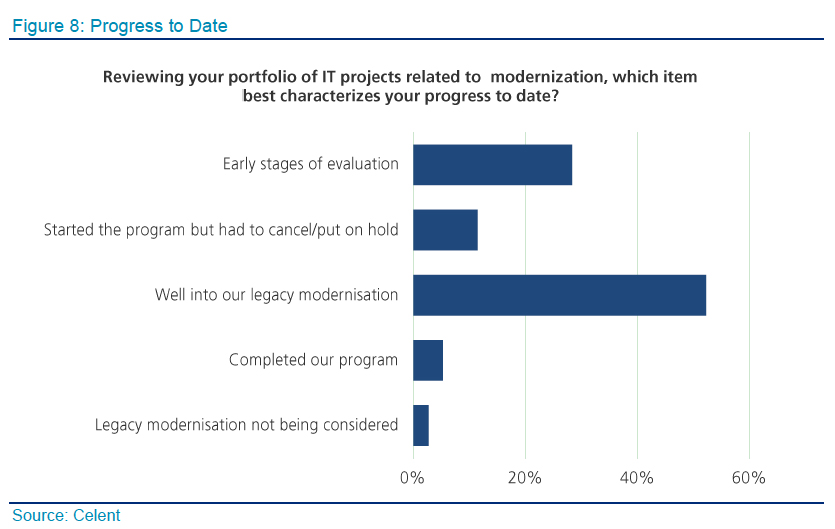 Stagg-Macey stresses that the term "modernization" is not strictly defined but says that the trend is clear. "About two-thirds of the initiatives are rip-and-replace," rather than "modernization" in the legacy wrap-and-extend sense, she notes (see chart below). If the Nationwide PolicyCenter initiative signifies anything, it's that a changing approach to technology is now a fait accompli, she suggests.

"The world is moving, and if you're not part of that, you're missing the boat," she says. "The industry discussion should shift to a consideration of the complexity of IT and business change. If we can agree that, in terms of technology modernization, the train has left the station, then the question is what does the journey look like, not whether we should buy a ticket." 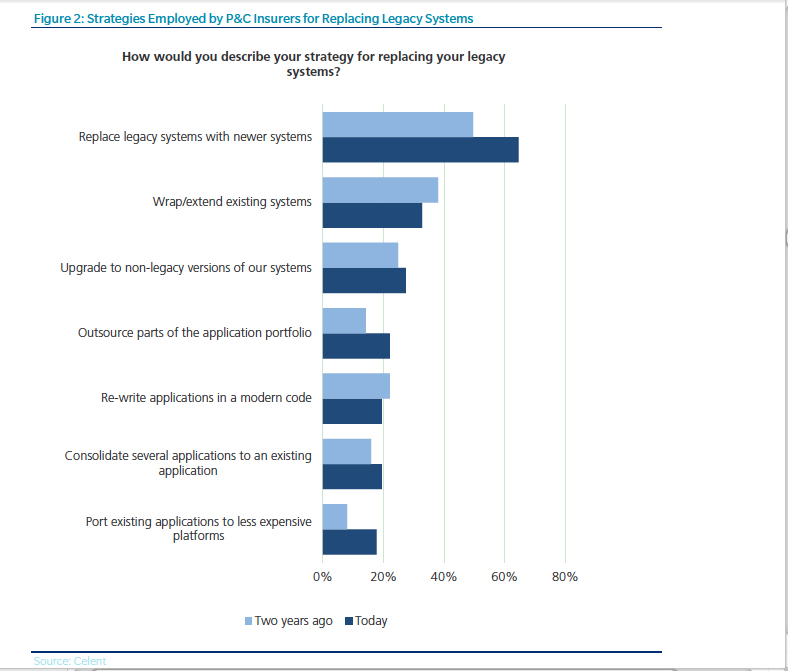