50%
Tweet
Policy administration system replacement remains key for some insurers, but others find they don't depend on these applications to do as much as in the past. Is this the wave of the future?

Like many insurers, Capitol Insurance ($150 million in direct written premium), a Middleton, Wis.-based regional P&C and surety carrier, had to face the fact that the limitations of its legacy policy administration systems (PAS) would not support its business objectives. "We realized that we weren't going to be able to bolt the features we needed onto our legacy systems," recalls CIO Troy Lethem. 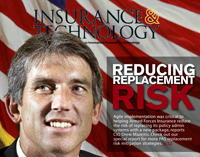 Capitol took the plunge and consolidated its surety systems on OneShield's Dragon through an initiative that concluded in 2008. On the P&C side, the insurer replaced green-screen technology with a bolted-on front end with Mphasis Wyde's Wynsure system, in a phased rollout ending in 2011.

Lethem offers a cautionary note: "There were growing pains," he says. "If your organization has not done a large system replacement before, that should be a red flag -- it's probably going to be much harder than you think. You'll need to find a system partner that understands this and can help you succeed."

Those red flags appear to be waving briskly. Recent research by SMA (Boston) suggests that many carriers are looking for alternatives to replacement, at least in the short run. For the first time in several years, policy administration doesn't rank in the top three priorities for major initiatives, reports Karen Furtado a partner at the research and advisory firm.

"This doesn't mean that PAS have lost their importance or that insurers aren't addressing capabilities associated with them," Furtado comments. "What it does mean is that the days of policy systems having to be all things to all people are becoming history."

Thanks to modern architecture and flexible components, in an increasing number of cases, insurers will postpone replacement initiatives and instead implement capabilities, such as agent portals, underwriting systems, or customer experience-related functionality, that let them take advantage of immediate business opportunities, Furtado says.

"We see customers looking to develop things such as unified desktop capabilities, and unified case management capabilities, and let the legacy systems do what they do best, which is functioning as system of record," Harrington says.

On the other hand, when it comes to replacement options, insurers are in a better position today because of the increasing availability of componentized suites, which are an alternative to both more risky "big bang" full core system replacements and also multiple-vendor best-of-breed approaches, according to Chad Hersh, a partner at Novarica (New York).

"We now have modular suites that can allow you to implement a piece at a time with more reasonable cost than best-of-breed because there's relatively little expense to integrate components," he notes.

Hersh affirms that ancillary systems are being used to wrap and extend and solve immediate pain points without having to resort to the "open heart surgery" of replacement, but he says that these strategies are more likely undertaken out of need rather than preference.

More enduring alternatives to replacement are also possible, insists Frank Petersmark, CIO advocate at consulting firm X by 2 (Farmington Hills, Mich.)."If data and integration are well thought through, there are cases where keeping a legacy mainframe platform is a good option, particularly for larger companies," he says.

Rearchitecting an insurer's core technology environment can lessen PAS replacement risk by obviating some of the more problematic issues associated with such initiatives, Petersmark adds. For example, carriers can avoid data migration issues by creating a central data hub, or address customer and agent issues through a separate presentation layer.

"Being able to configure one's front end is a huge advantage, because it enables you to be more responsive to what the business needs in a more proactive way," Petersmark comments.

"By putting a modern front end on a legacy system insurers can kill a lot of birds with one stone, providing the ideal user experience in all cases, and supporting existing distribution channels and reaching new ones," Corman says.