Assessing the state of policy administration systems modernization is a bit like the tale of the blind men whose sense of what an elephant is was determined by which part of the animal they touched. One's sense of whether the insurance industry has made meaningful progress in updating or replacing legacy policy admin systems depends on many factors, including company size, business segment and packaged solution features.

Karen Furtado, a partner with research firm SMA, knows this better than most as a result of her ongoing research into policy admin plans and priorities. SMA's recent report on policy administration activity found that "there has actually been progress!" Furtado says. When SMA studied the issue in 2011, "88% to 90% of life-and-annuity insurers reported their systems were 10 years old or older," she notes.

In the 2013 research, the systems were reported as even older -- 16 to 17 years old, regardless of line of business. But the percentage of respondents reporting systems older than 10 years had declined to 77%. "These things are not easy to replace, so that is definitely an indicator the situation is improving," Furtado says. "The systems are not as old."

Another sign of progress is evidence that insurers have reduced the number of systems they're operating. "We do not have as many companies saying their number of policy administration systems is seven or greater," Furtado says. In 2011, "it was remarkable how many companies actually said they had seven or more systems." Elaborating on the improvements, she notes, "On average, 24% to 31% of companies have a modern current system in place -- over a quarter of the market has modern and current solutions in place. That's good." 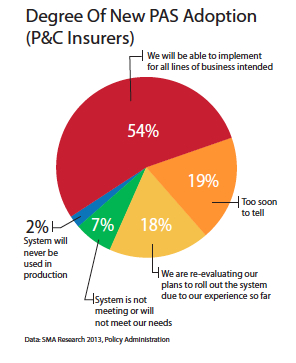 It's a different story in the over-$1 billion-asset group. "Only 40% of personal lines insurers over $1 billion had just one [policy admin system], and 30% had two to three," says Furtado. "Thirty-six percent had one and 29% had two to three." In this group, there's more systems proliferation in specialty lines -- not surprising because of a focus on narrow point solutions and quick, opportunistic implementations, she adds: 10% had one, 30% had two or three, 50% reported four to six.

At the same time that insurers are reducing the number of policy admin systems they're operating, they're also in various stages of implementing modern core systems, whether evaluating vendors or actually rolling out something new. As for the effectiveness of these initiatives, it's somewhat of a mixed bag. "I found out [many companies] were able to get to production, but [the system] wasn't necessarily meeting expectations," Furtado says.

The SMA research uses the criteria of business scope, technology scope, schedule and budget. Based on the responses to the most recent study, "budget 52% of the time was meeting or exceeding expectations -- that's good," she says. "Schedule? Not so much. Only 34% of the time did it meet or exceed expectations, and 55% of the time it did not meet expectation but got into production."

Coding? Thanks But No Thanks

Some frustration probably is inevitable given the complexity of a large company's business, Furtado acknowledges. But she suggests that a big part of the problem is with the policy administration systems themselves. SMA asked insurers who were disappointed in their implementations why, "and the No. 1 answer was that the business user tools still require coding," Furtado says. Too many systems that tout their configurability "still require scripting. They are not all configurable by a businessperson."

The second biggest challenge for the over-$1 billion group of insurers is that of integrating packaged policy admin systems with other solutions, according to the SMA research. The third biggest challenge area, Furtado says, is that "the system did not deliver the business functionality it promised. That means they are back coding again. [The systems] weren't as robust as [the insurers] were thinking." The fourth challenge was that "maintenance of content was too difficult, very time consuming. They could stand up the implementation but the maintenance of the system was much more complicated than they expected."

These concerns make it understandable that the No. 1 and No. 2 desired features in a policy admin system, according to SMA's research, are product configuration and a business rules engine. "So solutions in the market that [require insurers] to hard code decisions and are not using business rules engines are not competitive; they are not what insurers are looking for," Furtado says.

In addition to these capabilities, she adds, "we're hearing more about architecture conversations much earlier. There have been enough implementations that have been challenged -- they're all raising the red flag. Make sure you've brought someone in who understands the architecture and the long view of ... what [the solution's] challenges are going to be in the maintenance world. Designing and understanding what that is, is critical at the starting point -- it's a step you can't skip."