50%
Tweet
Harleysville Insurance collaborates with its agents on IT projects to break away from the competition.

Appealing to every agent is tough, but Harleysville Insurance strives to trump the competition by focusing IT projects on its agents' needs. According to SVP and CIO Akhil Tripathi, the carrier's new Web portal and real-time quoting policy administration system, for example, were developed in collaboration with its agents. Since joining Harleysville (Harleysville, Pa; $3.7 billion in total assets) in 2005, Tripathi says, he has been committed to enhancing product speed to market and providing agent tools to improve ease of use as part of the carrier's strategic business initiative. "The combination of improving the ease of doing business and launching products and services is a race that all carriers are running," Tripathi comments.

Pacing IT projects to capture near-term opportunities in the marketplace and buttress future business growth is a philosophy Tripathi has carried with him throughout his career, he says, and the timing of IT projects is important when vying for independent agents' attention. "It is very important to understand our firm's business strategy and the competitive landscape before finalizing a technology strategy," Tripathi explains. "Our technology architecture, strategy and plans have to be designed so we can provide the best solutions to capture the marketplace opportunities in a short-time horizon. We need to consider the technology landscape of the future as well as the changes in the P&C insurance business."

With the P&C insurance industry in a soft market cycle, competitive pressures have escalated, prompting Harleysville to try to make it easier for agents to do business with the insurer by increasing its IT budget to create more agent tools and services, according to Tripathi. Those technology investments include enhancing the carrier's ability to quickly bring products to market and providing online tools to supply information to agents about products. "Our ability to make it as easy as possible for agents to do business with us will make it that much simpler for them to choose us over our competitors," says Tripathi.

A Portal for Business Growth

One of those services is Harleysville's agency portal, which gives the company's independent agencies access to account information on billings and claims as well as the ability to submit business electronically. This makes it easier for them to respond to policyholders and submit new business. "This project is focused on the improved delivering of products to our agents," relates Tripathi. "We plan to achieve that by getting the best use of technology without restricting them to a single entry method."

From the time design and testing of the portal began a year ago, Tripathi relates, Harleysville has worked closely with its National Agents Advisory Council (NAAC), a group of agents that deal closely with the carrier and discuss ways to improve business, to be certain the portal would meet agents' needs - including online access to the carrier's systems and services, and electronic submission. The NAAC members took part in conference calls with both IT and business representatives, opened their offices to visits from Harleysville's IT employees and participated in hands-on testing sessions at the insurer's home office, Tripathi recalls. "One of the most exciting moments has been observing the initial reactions of our independent agency partners when our new agent portal rollout began [in September 2005]," he says. "They told us it exceeded their expectations in terms of the functionality and delivery schedule."

After an extensive review of the functionalities of other carriers' systems, Tripathi and his IT team of 25 partnered with a third-party developer that he declines to name to create a portal using J2EE and Microsoft (Redmond, Wash.) .NET technology leveraging service-oriented architecture for the Web. The portal runs on Harleysville's mainframe-based systems that handle billing inquiries and claims history. The carrier used both J2EE and .NET because it currently is transitioning to a .NET platform, Tripathi explains. "We have a number of Web services that deliver information from our back-end systems," he says. "This portal brings information from as many as 12 different systems using Web services written in J2EE."

To develop the portal in .NET, Web developers were brought in to help design and build the portal's capabilities to submit business electronically. In September 2005, nearly two dozen agents - plus members of Harleysville's commercial lines field underwriting team - attended a hands-on demo to rate the agent portal for effectiveness and ease of use. The developers then updated the look and feel of the portal to agent preferences and added features such as calculators.

Two weeks later, another two dozen agents and members of the carrier's field underwriting team took part in a second session to rate the enhanced portal. After receiving positive feedback from the NAAC, members of Tripathi's IT team then collaborated with a pilot group of 20 agencies that put the system through two months of rigorous testing.

The most rewarding aspect of the pilot, according to Tripathi, was the guidance his team received from the carrier's agency partners. "The members of our NAAC, the testing groups and the pilot group told us what worked well and what didn't," he says. "Their collective insights are important to helping ensure that what we deliver will be what they want."

In January 2006, Harleysville began a phased rollout of the portal to 1,000 agents. The company provided face-to-face and one-hour Web-based training sessions for all agencies involved. "During the pilot we have established a new level in our relationships with agents, and we continue to get feedback from them," reports Tripathi.

Tripathi notes that Harleysville will introduce two major enhancements to the system this year, though he declines to offer specifics. "This is the framework for delivering information and transaction-processing capabilities that will continue to be expanded and enhanced going forward," he says. "We believe this portal will continue to add value for our agents in improving productivity and connecting with their agency management systems."

Along with the portal, Harleysville is working on a new commercial policy administration system to reduce time to market for new products and give agents real-time quoting. Tripathi began searching for a Web-based system with rating capabilities in mid-2005. At the end of the year, Harleysville had selected AQS' (Hartland, Wis.) Web-based AQS/advantage suite based on the product's customizable architecture, which Tripathi believes will allow the carrier to add lines of business and products rapidly. The AQS/advantage suite includes AQS/advantage, a policy administration system that incorporates ACORD standards and contains a self-maintenance tool that electronically receives rate rule updates from ISO's integrator system.

Harleysville is in the early stages of implementation, moving from a mainframe platform to a server-centric platform based on .NET. "The implementation challenges we are facing are very typical," says Tripathi. "We need to make sure we have clear objectives and well-defined time lines, as well as a strong relationship with the vendor."

The carrier plans to start a state-by-state rollout of the system in 2007, according to Tripathi. "This is a platform on which we will launch new products and services," he says. "It is a significant initiative that will contribute greatly in the coming years toward our goal of making it as easy as possible for agents to do business with us."

Lines of Business: Personal and commercial property and casualty, and life insurance. 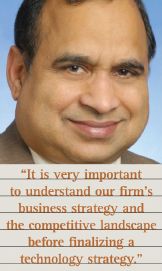 Career Path: Tripathi earned a B.S. in mechanical engineering from Kanpur University (India), a master's in engineering from UCLA and an M.B.A. from the University of Pennsylvania's Wharton School. He started his career in IT management positions with The Vanguard Group, General Electric and SunGard. Tripathi then served as VP and CIO for AIG Life (ALICO) and the former Providian Direct Insurance. In 2000, he became EVP and IT executive for the Fusura eAgency, an Internet insurance exchange launched by AIG. In 2001, he became managing director and CIO of Marsh Affinity and Private Client Services, a division of Marsh & McLennan. Tripathi joined Harleysville as SVP and CIO in 2005.

IT Philosophy: "Our No. 1 technology priority is to make it easier for our agents to do business with us."