One of John Kellington's most powerful professional memories hearkens to an argument he had with a fellow IBM executive in Europe some years ago. The specifics have become hazy over time, Kellington says, but he remembers an "aha" moment, triggered by a colleague making a point about insurance enterprise technology models. "I thought, 'Oh my gosh! That could really change how we design insurance systems,'" Kellington recalls. "Based on that moment, I did some work with Java and developed some prototypes that eventually evolved into Ohio Casualty's PARIS system."

Built on Java, IBM's (Armonk, N.Y.) WebSphere and DB2, and based on the vendor's Insurance Application Architecture (IAA), PARIS is the jewel in the crown of Kellington's achievements at Fairfield, Ohio-based Ohio Casualty Group ($1.45 billion in written premium), which he joined in 2000. Since its initial rollout in 2001, PARIS (policy administration, rating and issuance system) has replaced five legacy systems associated with the carrier's auto, home and business insurance products. Kellington's other accomplishments include helping Ohio Casualty become one of the first carriers to introduce a Web service for an inquiry transaction (nearly five years ago) as well as pioneering quote and issue of personal lines policies from an agency management system -- not for just one, but for five different systems.

In an age of "buy versus build," Kellington's successes are all the more remarkable. But they reflect his technology-focused origins and, in particular, his work on IBM's enterprise-oriented IAA. "If you are focused on any one area of systems -- whether policy admin, claims or billing -- you might have one perspective. But when you step back and look holistically at insurance capabilities you get a different one," Kellington explains. "Having that deep experience in enterprise models gave me an important perspective on how insurance systems could be designed to maximize their effectiveness."

Working as a consultant on legacy migration and other initiatives for large insurance carriers helped to cement in Kellington a strong customer orientation, which has shaped his philosophy with regard to the proper relationship of technology to business. "Ohio Casualty has great insurance skills and has always been known for excellent underwriting," he comments. "But my organization is a software development and systems deployment organization that happens to be working for an insurance company."

In keeping with that concept, Kellington has driven the adoption of development methodologies and project management disciplines at Ohio Casualty. To those who criticize formal processes and project disciplines as being unnecessary levels of bureaucracy that potentially can mask inefficiencies and incompetence -- particularly in smaller companies -- Kellington replies that "The best software firms have figured out that those processes and disciplines are needed for success, so why should we be any different?" What he has learned from a career of tackling challenging projects is that "the ones that tend to succeed have a common theme: consistent management structure and consistent deliverables," Kellington adds. "Consequently, I believe in the need for excellence and high capability maturity in what we do here, and that's what I push for constantly."

Another indispensable success factor, according to Kellington, is an excellent staff. He claims that Ohio Casualty has some of the best architects and managers in the world, and says that his organization is what he is most proud of. "Any organization can pull off a given project, but I think it takes a very special team to consistently succeed at everything it does," Kellington says. "Ohio Casualty's IT organization has proven its ability to pull off very difficult projects with limited resources time and time again."

One of the secrets to the IT organization's success is Kellington's philosophy to cultivate excellence within specialized roles. An effective organization, he believes, requires excellent business analysts, experienced project managers, seasoned architects and highly capable technology specialists. "If you're missing any one of those four roles, the probability of your being successful is diminished," Kellington remarks.

Many management styles encourage professionals to play multiple roles, Kellington says, but he believes that is a recipe for failure. The danger only is increased when technical personnel feel their only chance for advancement is to move into management, when in fact they may not be suited for that role, he notes. "At Ohio Casualty we firmly believe that we should create careers and tailor roles that allow individuals to grow in their career," Kellington states. "Ultimately, effective management requires getting the right people aligned to the right role and the right project."

That objective is reinforced with the Ohio Casualty IT organization's creation of a corps of what it calls professional development managers (PDMs). "In the heat of battle, when working on important projects, you tend to focus on delivery and may lose sight of the human side of the equation," Kellington comments.

Every individual in Kellington's organization reports to a PDM, who provides a degree of career counseling and works to place professionals in appropriate development areas and projects. "That has allowed us to move people around with less friction and ensure that we have the people we need in high-priority projects," Kellington says. "We've created a fluid organization, which is an important achievement -- as you move people to high-priority projects, you will always have a shortage of resources. But by assigning the right people into the right tasks, we can get a lot of stuff done."

Kellington says he also believes that the industry as a whole can get a lot done by adopting some of the same principles and technologies that have benefited Ohio Casualty, such as a focus on enterprise models, the use of service-oriented architecture and the adoption of technology and process standards. That belief has animated his participation in ACORD (Pearl River, N.Y.), for which he currently serves as chairman of the Standards Committee and a member of the board of directors.

Insurers typically play up the differences among not only verticals, but even among companies within those verticals. But the real differences among insurance companies -- whether life and annuities, P&C or health -- are the products they sell, Kellington argues. "Everything else is consistent -- people, locations, methods of contact, information about money, etc. -- so it makes little sense that we have so many different messaging standards," he says. "If we can standardize those, we may be able eventually to get to a common service-oriented architecture that supports the entire industry." 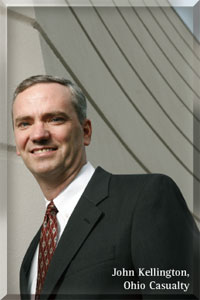 Career: Kellington spent 18 years at Armonk, N.Y.-based IBM serving in a variety of positions, including senior architect, client/server architect, systems engineer and industrial engineer. As an IBM consultant, he led many high-profile legacy migration projects for large insurers. Before joining Ohio Casualty in 2000, he was chief architect and principal for IBM Global Services' National Insurance Practice.

Pastimes/Hobbies: An outdoorsman who enjoys golf, downhill skiing, biking and hiking, Kellington also is a fan of the television show "24." In fact, he says he wishes he could extend an employment offer to the Chloe character. "Her technical background is quite amazing," Kellington says. "If she could ever find her way here to Fairfield, Ohio, she'd be welcome!"