50%
Tweet
Insurance companies are using technology to help policyholders reduce their risks -- and could reap rewards in terms of reduced claims volume.

Somewhere in England, a university student prepares for a night on the town. He selects an outfit, dresses, eats dinner and heads out to his car, when the phone rings (or vibrates). Expecting perhaps a friend with a last-minute change to their plans, the student answers. But on the other end is an unlikely party: a representative of the student's auto insurance company. After ensuring that the student isn't driving at that moment, the representative breaks the news: Data collected from the telematics device installed in the student's car indicates that his driving behavior puts him at high risk for a crash that, in addition to potentially causing physical harm, could raise his already-high auto insurance rates for years. 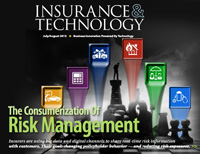 The Consumerization of Risk ManagementThe July/August 2013 digital issue of Insurance & Technology examines the technology developments that are helping make enterprise risk management a reality for insurers. Our cover story explores how technologies such as telematics and analytics are letting insurance companies help policyholders modify their own risks -- which also helps carriers reduce exposures and claims. To read more, download our July 2013 digital issue now.

That scenario is possible if the student is a client of Ingenie, which provides auto insurance to younger drivers in the U.K. That demographic pays "incredibly high" rates, says co-founder Richard King, who cites statistics indicating that as many as one in five will have a crash within six months of getting a license. Ingenie aims to offer easier pricing by installing in the car a telematics device, which transmits data that's scored by the company and color-coded green, red or black. "Green" drivers are eligible to have their premiums lowered, while "red" or "black" ones can expect higher premiums -- or a phone call from a rep, trained in psychology, who will attempt to correct their behavior.

"Drivers who received red messages for acceleration were four times more likely to make a claim," King says. "So we call and have a polite conversation with them about their driving."

On the surface this may look like customer engagement and tailored service. But Ingenie's model also suggests a new development in the management of the risks these customers represent -- essentially, the consumerization of risk management, by pushing information back to customers in a way that motivates them to modify their behaviors (and presumably reduce the risk).

"Most kids don't understand insurance -- they don't know what impact poor driving is having on their rate," King says. "We don't act on impulses, saying you did one thing here and there. We look at trends, and about every 10 days you get feedback."

That feedback doesn't always come in the form of a phone call. Ingenie provides dashboards to its customers so that even good ones can stay abreast of their driving habits and make necessary adjustments. The company is growing -- it recently contracted with SAS for a new analytics platform to help handle the growing volumes of data it's taking in -- and King believes this approach is to be credited for that growth.

"We did focus groups with parents and young drivers, and the message was loud and clear from the parents: 'I want there to be a stick as well as a carrot,'" he says. "We've developed a solution that is also a method of how to change behavior. We're seeing the black box bring down the average cost of insurance by about 30%, and after one year of having a policy, they are saving up to 49% at their first renewal."

Ingenie's efforts and other initiatives at insurance companies show that by changing customer behavior, companies' risk profiles can improve overall. After all, conscientious policyholders file fewer claims. It's the reason many health insurers release gamified weight-loss programs or apps. But in the wake of a privacy row precipitated by the exposure of a sophisticated data-collection program by the U.S. National Security Agency, it's understandable if the Ingenie scenario might make some insurers squeamish.

"The pace at which this is going is prompting some hand-wringing -- there's a clear need to get ahead of this from a competitive point of view," says Tom Deutsch, a program director for IBM's big data team who concentrates on the insurance industry. "You're not going to pick up the phone and call every customer that has a degradation in their risk profile. You can automate it, but it has to be in a way where customers are happy to have the interaction and don't feel like they're being watched."

Insurers didn't necessarily set out to change the way they approach risk management, Deutsch says. Many of these initiatives were born of a need from their marketing departments to connect with policyholders more often, as in other high-touch industries such as banking and retail.

"Insurers have an ability to participate in things they couldn't before," he explains. "It creates opportunities, but also challenges. If a company is aware something is happening, does it have a legal, moral or business responsibility to do something about it?