To hear CTO Michael Kim tell it, The Hartford's P&C division's innovation lab may be one of the most exciting parts of the company. Created three years ago by Gary Plotkin and innovation lab director John Anthony, the lab finds itself in a similar position to the rest of the P&C division's IT team. 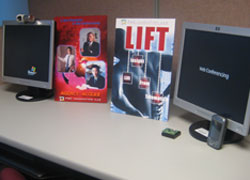 Plotkin and Anthony have laid the groundwork for success by bringing in the right people, establishing credibility within the organization and setting up the right processes. Now Kim, who assumed oversight for the lab when he was appointed CTO last July, and Anthony will look to deliver on the group's potential. "What we're doing now is turning the corner to have big impact," Kim says.

The mission of the lab, according to Anthony, is to identify new technologies to help the company create sustainable competitive advantage. "The word 'sustainable' is key for us because of the risk of being a first mover in a lot of these spaces," Anthony says. "We have to be clear that there's an opportunity ... that can be protected in a way that provides a longer tail on that opportunity than the typical six- to eight-month adoption curve that you see on technologies today."

One of the most tangible and recent projects to come out of the lab is LIFT (Lift Intelligence From Telematics), which aims to gather data around the causes of repetitive back injuries for the carrier's workers' compensation business. "There's not a lot of insight into how or why [workers] are getting hurt," Anthony explains.

To understand the problem, the lab developed LIFT, which uses relatively inexpensive sensors -- three-dimensional accelerometers -- to measure how and how often workers lift. Collaborating with customers, the carrier will collect workers' accelerometer data and partner with Boston University to analyze the information. Tests have been successful within the lab, and the project currently is entering a pilot stage with real workers, Kim notes.

"We believe that this technology might actually have an impact in reducing loss costs over time for us," Kim says. "But we believe that our customers are going to benefit more from this directly than we will."

The eventual success of projects such as LIFT, Anthony adds, depends greatly on the innovation lab's ability to be aligned with the business. "A technology innovation lab ... is probably the closest within our industry that you'll get to research and development," he says. "So there's an additional burden to make sure that the things we're working on are recognizable by our key stakeholders -- that there's a clear line of sight between what we're doing and how that aligns to the longer-term strategies of the organization."