50%
Tweet
After four years of investment and organizational transformation, The Hartford's P&C division looks to execute its new strategy to provide better value to its business customers and end users.

A Day In the Life: With Gary Plotkin, CIO, P&C Operations, The Hartford

Clearly, there is a certain camaraderie that exists among the IT leadership of The Hartford's property and casualty division. As we walk among several office buildings during a recent visit to The Hartford's headquarters, which are situated atop a hill just northwest of downtown Hartford, John Anthony, director of the P&C division's innovation lab, asks me to deliver a message to his colleague, CTO Michael Kim. Both Kim and Anthony are avid triathletes, and Anthony wants it to be known that he could beat the CTO in a footrace. 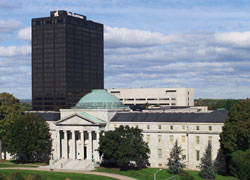 "We spend so much time together, getting on each other's nerves," Kim responds with a smile. But between the friendly banter, the P&C division's technology team has positioned the organization for future success.

Over the past four years, The Hartford has undergone an IT transformation effort, one that has led to significant IT investment in the P&C group -- mostly in foundational areas such as enterprise content management (ECM), business process management (BPM) and portal frameworks, Kim relates. Concurrently, the organization was restructured to facilitate better IT-business alignment, leading to Gary Plotkin's promotion from P&C group CTO to CIO last June and Kim's CTO appointment a month later.

Technology investments have been made, and processes have been fine-tuned, Plotkin notes. Now the IT team must stand and deliver. "The business has given us latitude for the last three and a half or four years in recognizing that we needed an opportunity to improve ourselves," he says. "We're now at the point of delivery. There are no more excuses of legacy technology or a lack of capability or resources or costs. Now it's about our ability to deliver."

As the IT team reaches the culmination of the maturation process, its focus has changed from enablement to execution, Kim says. The shift, he adds, will require the carrier to embrace virtues such as Six Sigma and CMMI (capability maturity model integration), improve role clarity, and ensure consistency across the organization.

To do so, the insurer will continue to rely on the strong bonds that have strengthened its ranks. "Not only do we need to spend a lot of time together and interact, but it also means we're comfortable having frank and open discussions," Plotkin comments.

Given the team's new organizational structure, that kind of trust is integral to success, Kim suggests. "Gary is making promises to the business customer, and he has to trust that [VP of IT management Alpa Patel] can deliver on the projects," Kim explains. "If that trust isn't there -- where you're covering each others' backs and helping each other -- it would be a fiasco."

Partnering With the Business

Behind The Hartford's IT transformation is a fundamental shift in how the IT organization interacts with the business. Historically, Plotkin relates, the two groups took an "over-the-wall" approach to cooperation, with little accountability for IT leadership.

As the P&C division has sought to eradicate that mentality, the CIO role earned a seat at the executive table for major business discussions. Then, seven or eight months ago, The Hartford took things a step further by redefining the roles within its IT group and reorganizing around core competencies.

"We've moved into a different model, in which the CIO no longer has ultimate delivery responsibility," Plotkin explains. "Instead, he's much more business-focused. He still has business segment CIOs, but his accountability is almost solely to the business and getting further involved [there]. ... Now we're actually engaged with the business leadership."

With Plotkin now focused on the business, Kim's role as P&C CTO has been shaped to oversee architecture, information management, a business strategy consulting practice and the P&C group's innovation lab. Application and technical services VP Keven Busque, a 30-year veteran of the company, is in charge of production support and system reliability. Meanwhile, Patel focuses on the restructured Application Development and Maintenance (ADM) group, which Plotkin describes as The Hartford's "software factory."

Before the reorganization, Plotkin recalls, the IT group talked about the business in terms of applications. "This new model allows the CIOs to talk about business functions and the development team to worry about the application aspect," he explains.