50%
Tweet
WellPoint President and CEO of Operations Mark Boxer has achieved prominence in the health insurance industry through a combination of technology depth and a resolute focus on the business.

Some executives come to technology from the business side and some come to the business side from technology. From early on in his career Mark Boxer has demonstrated the ability to belong fully in both worlds. Having begun his career in the utilities industry, Boxer earned his M.B.A., spent a decade working for seminal computing company Digital Equipment and then emerged as the right man at the right time as the e-commerce revolution began in the health insurance industry.

Boxer was recruited by an old boss to become VP of technology operations at Cigna Healthcare in 1996. There, he rapidly moved from strength to strength, rising to senior vice president of information technology and e-business before moving to Anthem in 2000. At Anthem, his combined business and technology acumen proved an invaluable asset as the consumer-directed healthcare revolution heated up, resulting in a series of senior roles, including CIO and chief strategy officer. When the 2004 merger of Anthem and WellPoint Health Networks created Indianapolis-based WellPoint Inc., Boxer took over both IT and service operations for the combined organization. He says he took on the new role with a view toward fully leveraging the potential of WellPoint's size and scale as the largest health benefits company in the nation in terms of commercial membership, with medical enrollment of nearly 35 million members. 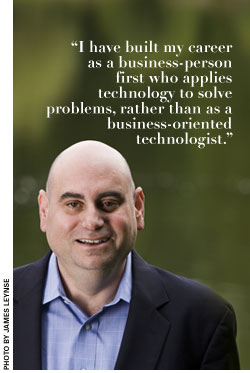 Today, Boxer is president and CEO of WellPoint's ($56.9 billion in 2006 revenue) operations, technology and government services business unit. (The carrier's other business units are commercial and consumer business, and specialty senior and state-sponsored business.) Boxer's organization brings together crucial areas of competence in today's health insurance world: customer service, e-business and transaction processing on a massive scale. Boxer manages an organization of nearly 24,000 associates with an annual budget of approximately $2.5 billion. The unit includes 3,500 IT professionals with a technology budget of more than $1 billion.

Boxer believes he benefited greatly from his 10 years at Digital Equipment, during which he says he moved frequently among IT, consulting and outsourcing management roles and was exposed to germinal technology developments. "Some things we were doing were before their time, such as Internet-managed services in the early days of the Web, business process outsourcing and ASP [application service provider] models for enterprise services," says Boxer "Today these are mainstream."

However, Boxer adds, he also believes that time has reinforced his understanding of technology's instrumental purpose in business. Acting on that insight, he says, "I have built my career as a businessperson first who applies technology to solve problems, rather than as a business-oriented technologist."

Indeed, IT can make a tremendous contribution to the troubled healthcare industry by simplifying the customer experience, reducing costs and even improving safety and access for consumers, Boxer affirms. And he believes his history of crossing between technology and business leadership roles has given him valuable insight into the challenges of fulfilling that promise.

Boxer faced such choices when he took on the role of SVP of e-commerce at Anthem, which was growing rapidly both organically and through the acquisition of several health plans during a period of rapid technological evolution in the health insurance market. "It was like solving a multivariable equation -- we needed to integrate acquisitions, consolidate platforms and deliver innovative technologies all at the same time," Boxer recalls. As a result, he continues, "We became very good at governance and prioritization, integrating companies, and developing and launching many new capabilities."

Before the 2004 merger that created WellPoint Inc., Boxer had become Anthem's chief strategy officer, and since then he has taken on other strategic roles of increasing magnitude. The rise of a technology professional to those positions reflects the increasingly critical role technology had to play in healthcare, according to Boxer. "WellPoint operates in a data-intensive and transaction-intensive industry," he relates. "Our ability to adapt to various markets and leverage our size and scale, while simultaneously addressing local market-specific needs, relies heavily on having the right IT at the right time in the right place."

The emphasis on the right time has frequently translated during Boxer's career into delivering industry "firsts," such as the first prescription drug price-comparison tool accessible via browser-enabled cell phones, the first health product to implement initial quote through membership card technology, and the first multilingual capabilities, delivered through the Spanish-language portal "Nuestro Bien" and the "Mi Salud" personal health record. A sense of right timing has influenced Boxer's role in advancing WellPoint's consumer-directed healthcare capabilities in general, and in particular with regard to the acquisition of Lumenos, a leading provider of consumer-directed health plans. Boxer led that acquisition and oversaw the deployment of Lumenos' capabilities into the WellPoint enterprise.

The capabilities afforded within the consumer-directed paradigm at WellPoint represent a commitment to giving consumers the tools they need to make the best decisions for their personal healthcare and becoming better advocates for themselves, Boxer claims. "We are very proud at WellPoint of the many innovations that we've advanced," he says, "from our 360-degree health management program, which has a very rich portfolio of online tools, and our member health index, which makes use of our data analytic capabilities to measure the true impact of our programs on a member's health, to the leadership positions we've taken with personal health and electronic medical records, and the advancements we've made in e-prescribing, evidence-based medicine and early sentinel systems to identify gaps in care delivery."

Among the tools that characterize a member's online experience at WellPoint today, Boxer cites a hospital comparison tool that compares facilities based on demographic and clinical outcome measures and other quality indicators; the Graphic Surgery teaching tool, which includes educational modules focusing on surgery options; and a doctor comparison tool that enables members to see how other consumers rate physicians. Other technology-driven capabilities include monthly health statements, secure messaging, online care guides, a drug comparison tool, treatment cost advisers and access to nurse advocates, he adds.

As extensive as these capabilities may be, they point to an even more technology-intensive future for health insurance, as the industry becomes much more consumer-oriented and as the retail model becomes much more prevalent, according to Boxer. "The technology is no longer going to be able to be a fast follower; it's going to have to advance at a much more rapid pace," he predicts. "That will create opportunities for companies that can identify the sweet spots in the application of technology and move quickly; at the same time, it's going to create some risk for those who don't place their bets in the right ways."

Position:President and CEO of Operations, Technology and Government Services, WellPoint
Size of IT Organization: 3,500
Annual IT Budget: More than $1 billion
Career: Boxer began his insurance career in 1996 as VP of technology operations for Cigna Healthcare. He arrived at Anthem in 2000 as SVP of eBusiness and has served in various leadership roles at WellPoint/Anthem, including EVP/CIO, president and CEO of consumer-driven health plans, and chief strategy and business development officer.
Management Philosophy: "I learned from several career mentors that you have to take a chance on people and let them take risks. That's why on my team I have a mix of both seasoned veterans and high-potential emerging leaders. When we spot talented people, we try to groom and develop them. And when they fall, we dust them off and we help them succeed."
Hobbies/Pastimes: Boxer is an avid reader who enjoys multiple books concurrently. He also likes to cook, fish and golf, but he says he prefers to focus his free time on activities with his wife and two daughters.
Fun Fact: Boxer is involved with the Stevens Johnson Syndrome Foundation, which increases awareness of the adverse risks of certain medications.