50%
Tweet
How an emerging architectural approach can turn a ‘commodity’ into a strategic weapon.

This article is the first in a series of three on ACM — architecture for continuous migration. [Click here to read part 2: What Matters in IT: Solving Legacy with ACM]

Ravi Koka, Polaris Financial Technology Limited
Today, nearly a decade after Nicholas Carr’s famous article and book, the question that really matters is not “Does IT Matter?” For CEOs and CIOs it is “How can we spend our IT budget in ways that matter?” As Carr predicted, most firms have moved beyond the age of spending extravagantly. But it is more important than ever to think and spend strategically. Cost-cutting alone is insufficient, because while the times are tight, they also keep changing. Thus the great need is for strategic investments that can do double duty: reduce IT costs, while also enhancing the firm’s ability to adapt and compete in an environment where business needs, platforms and technologies all change constantly.

What many people do not fully grasp is that a focus on cost-reduction alone actually imposes multiple costs. The costs include actual dollar costs for system maintenance and upgrades. But they also include the opportunity cost of not being able to adapt quickly and full benefit from new business models, as well the cost of losing business to, or even being driven out of business by, competitors who are more nimble. Simply maintaining and updating legacy systems can easily consume most of a company's IT operating budget. The estimated spend per year on IT globally is around $2 trillion dollars. A study by A.T. Kearney of 200 businesses in the U.S., Canada and Europe concluded that only 20% of this IT investment goes towards innovation. The rest is pure overhead — that is, until the firm wants to do something significantly new. Then the legacy problem becomes not just overhead, but an obstacle.

Established companies have several generations of applications, each designed with technologies that were both state-of-the-art for their time and appropriate to the business needs of the time. The conundrum for most companies and CIOs is how to be more agile without disrupting the current operations, which are legacy based. A “big bang” replacement is risky and expensive — the few firms that have tried it have not had much success — and given that business and technical requirements will keep changing, it would be prohibitive to do big-bangs repeatedly. Few recommend such a solution today. Companies would be better served by accepting change as a permanent factor and start building-in agility gradually and iteratively.

There is an approach that does all of these things remarkably well. For want of a better name, the approach can be called ACM, or architecture for continuous migration. ACM is not proprietary and requires no products or services from any particular vendor.

It's fair to ask that if ACM is non-proprietary, why aren’t more firms adopting it? For one thing, it is still early in the game in terms of use of the approach in the field. Numerous studies of innovation have found that fundamental innovations typically take at least five to 10 years, and up to 20 years, to reach mainstream adoption. The paper that articulated the principles, Khosla and Pal’s “Real Time Enterprises: A Continuous Migration Approach," was published in 2002. ACM requires a solution architecture and design that seperates the various layers in application software – user interface, business logic and data access.

When architecture for continuous migration is implemented optimally, all five of these elements are present:

1) Federation as opposed to migration or integration: In other words, a federated SOA approach.

2) An extensible information model — meaning using an open-architecture, industry-standard schema for the object and data model.

4) A layered architecture, with loose coupling of applications. Loose coupling of the user-interface, business-logic and data-access layers allows changes to be made to one layer without disrupting the other.

Companies have focused on ways to reduce or eliminate various basic costs of running the enterprise. But this approach has its limits. Frugality and agility are distinct and potentially antagonistic objectives. Furthermore, this type of cost-cutting is not the only way to save. ACM is a rest-of-the-way approach that can build on more typical kinds of savings, in the process of making the firm more agile and competitive.

The reality for most firms is a constant re-building in the face of constant change. Every firm has legacy systems, including firms launched last week. The firms with the oldest systems are always at a disadvantage in terms of the legacy complexity they must deal with, since they tend to have a mix of architectures and systems conditioned by whatever was state-of-the-art when they first built their IT enterprises, plus a sampling of everything since. That includes, in many cases, packaged ERP solutions that were installed in hopes of fixing the problem "once and for all" — which doesn’t happen, because the ERP package, itself, “fixes” in place a set of systems which later become obstacles to further change. The same holds true for middleware installed at various times in attempts to integrate everything.

Every firm, however, can strive to grow more agile at less cost. Consider an IT “investment pyramid” that looks like this: 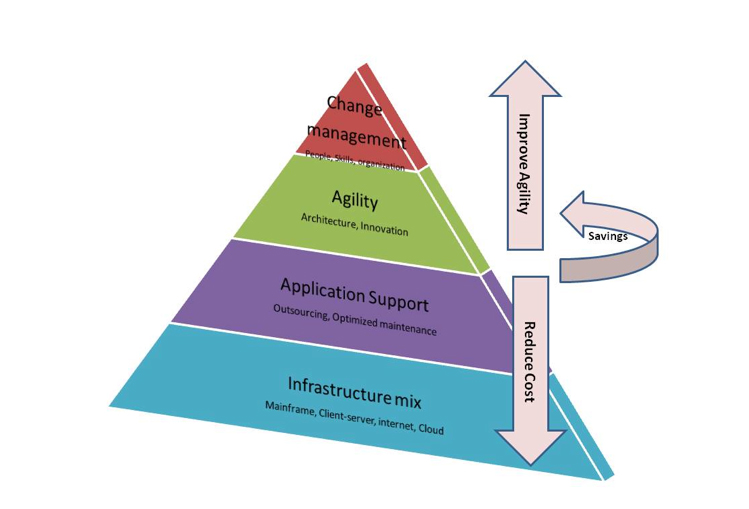 All firms start at the bottom with the infrastructure mix they happen to have. As noted above, all are not on equal footing in this regard, but everybody starts with what they have. In the next step up — which most have taken, or are taking — the goal is to cut the cost of running the enterprise as it is currently configured. That’s great, but it only takes you part of the way.

There is plenty of upside left, but to get at it, one must cross a divide. That requires a shift of mindset from a focus on solely reducing costs to a focus on agility, with the knowledge that one will have to keep changing to stay competitive. Therefore, from the middle of the pyramid (which is also “the middle of the pack” in terms of competitiveness), a logical next step up would be to take some of the savings from the basic cost-cutting and start investing in architecture that can support continual change. Further savings will accrue.

The final step is strong change management and skills training, to go along with the increased pace and degree of innovation that the firm will now be capable of. With almost any technology change, including ACM, the human factors have to be addressed to get the full benefits. Users have to be shown new system features, learn how to take advantage of them, and be helped with the transition from old ways of doing things.

About the Author: Ravi Koka is CTO, Insurance & Portals, of Polaris Financial Technology Limited, a provider of enterprise software for the banking and insurance industry. Prior to joining Polaris Koka founded SEEC Inc. and successfully completed the company's IPO on Nasdaq in 1997. Koka started his career with System Development Corporation (originally a division of RAND) and was an adjunct associate professor at CMU. Polaris Software labs acquired SEEC in 2008.