50%
Tweet
The non-traditional competitor's use of telematics, data visualization and customer engagement pioneers the virtues of the insurance digital enterprise in a creative, technology-driven business model.

At the end of last year I&T reported on the debut of MetroMile, a start-up company from the same entrepreneurs who created crop insurance company The Climate Corporation, which supplements farmers' normal coverage through an offering that uses parametric underwriting. Last Wednesday, MetroMile CEO Steve Pretre appeared in Portland, Oregon to demonstrate browser-based "digital tools" available to policyholders. These tools may provide a glimpse into a future for the insurance industry wherein carriers provide not only loss coverage but loss control or risk mitigation services to retail customers.

[See our coverage of MetroMile's debut and its connection to parametric underwriter Climate Corp in New Auto Insurer MetroMile Competes on Mileage Data.]

Although based in Redwood City, California, the non-traditional competitor opened its doors for business in Portland, a city known for environmentally conscious residents who exemplify a movement toward more dense urban living, more bicycling and more walking. Last week, Pretre showed the new tools to members of the MetroMile's "Test Drive" user group, which consists of 100 volunteers chosen to test the functionality MetroMile suite of products without an insurance policy. According to Portland Afoot, a local Portland journal dedicated to that lifestyle, the tools Pretre presented demonstrate: 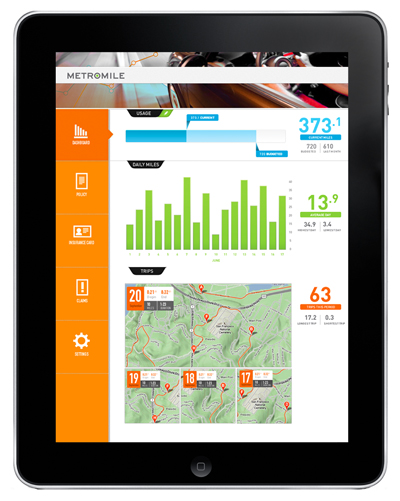 There are several lessons for insurers in MetroMile's model. First, it represents the incursion of non-traditional competitors through the use of novel, creative and data-driven business models. Secondly, it shows what Tata Conslutancy Services' (TCS, Mumbai) Vinod Kachroo recently remarked to I&T in our coverage of the future of insurance mobility with regard to insurers' progress toward becoming "digital enterprises":

Historically, insurers have invested a great deal in systems of record, but to compete in today’s world they must shift their focus to systems of engagement, Kachroo advises. The insurance industry has tended to attempt merely to extend current capabilities when what they need to do is develop capabilities that enable new business models.

MetroMile's model also shows a new use of telemetry beyond telematics. Traditional insurer State Farm has done something similar without telematics, offering a mobile phone app that allows users to measure their driving safety. MetroMile's tools go much further, not only in the degree of engagement but also in the sophistication of its digital tools. Finally, MetroMile's customer-engagement illustrates the potential for insurers to provide a variety of services to customers. As Portland Afoot reports:

"This isn’t just about insurance," Pretre said. "It’s about ‘How do we save you time and money on things that are related to your car?’"

In this case, MetroMile is providing useful data in conveniently visualized form to a receptive audience. The example shows how insurers can leverage data for a host of possibilities, including loss prevention services of one type or another. Whether such services were offered as a premium or included simply as part of an engagement strategy, they could contribute to diminished risk exposure, which benefits both insurer and insured. For example, homeowners might be given access to a variety of data, made easier to digest by visualization or gamification, which could help them to be alert to and make efforts to mitigate a wide variety of domestic hazards. Use of RFID-like telemetry devices could incorporate reports on changing conditions — such as temperature or time — that could have a bearing on risk of damage or injury.

Loss prevention is well-traveled territory in commercial insurance, but both engagement technologies and data distribution could bring the art to new levels. Consider the potential for analysis presented by increasing amounts of accurate data about construction and other materials and built structures, combined with telemetric sensing, visualization and periodic or real-time reporting technologies.

The possibilities are mind-boggling, and it seems inevitable that we'll increasingly hear stories of insurers adopting such technologies for differentiation and underwriting profit. Traditional insurers have a great opportunity in this regard — but so do non-traditional upstarts such as MetroMile.