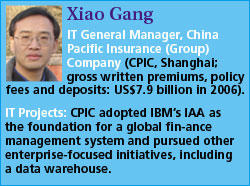 Since its founding in 1991, the China Pacific Insurance (Group) Company (CPIC) has had "the strategic objective of building itself into an internationalized insurance and finance service group, stepping steadily toward a modern financial group with sufficient capital, strict internal control, prudent operation, and outstanding services and profits," according to the company's Web site. "With its core value concept of integrity, prudence and excellence, the company is active in reforming and innovation to add values for its clients, shareholders, employees and other related parties." And from the time he joined the Shanghai-based organization in 1994, Xiao Gang has been dedicated to helping CPIC, now China's third-largest insurer, achieve these goals. In his role as IT general manager, Xiao has stressed the importance of a long-term, comprehensive view of the ways technology can help the insurer carry out its mission.

Xiao has led or been involved in a number of projects geared toward improving the robustness and flexibility of CPIC's operations. Many of these initiatives have been under the auspices of CPIC's IT Strategy and Plan (ITSP) program, which in 2003 introduced a road map for IT development. Xiao played a key role in defining the ITSP agenda and leading the projects that have come out of it, such as implementation of the CPIC IT help desk.

Xiao also sponsored an initiative to improve CPIC's enterprise network capabilities, including enhanced control for centralized gateways to the Internet and building up capabilities for remote IT auditing. A related project has been centralization of IT operations, which resulted in both reduced operating costs and increased control of IT operations.

Turning Data Into an Asset

Another initiative under Xiao's direction has been a data warehouse project that transformed the data held within the enterprise into an asset that is accurate and accessible. The goal was to address challenges CPIC faced in terms of inconsistent quality of enterprise data, which had hampered the carrier's ability to make decisions or to access branch data across the enterprise. With the enterprise data warehouse, CPIC has been able to improve actuarial calculations and risk management.