50%
Tweet
Erico Tadashi Yamamoto has transformed Martima Seguros' IT department from an internal service provider to a strategic business partner. 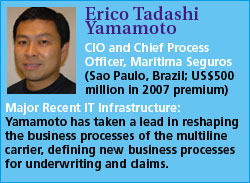 Erico tadashi yamamoto's commitment to improvement started with personal growth, but the journey also has shaped the fortunes of Sao Paulo, Brazil-based multiline carrier Marítima Seguros (US$500 million in 2007 premium), where he serves as CIO and chief process officer. Hired as a junior systems analyst in 1993, Yamamoto rose to the position of IT coordinator by 2000, preparing himself for management by earning a post-graduate degree in business administration.

Armed with the business insights he gained through his studies, Yamamoto drove a series of efficiency measures at the insurer as a manager between 2002 and 2005. "In 2002 we began outsourcing help desk services," he recalls. "It was important to understand how outsourcing worked so we could be more experienced as we moved on to the most critical services later on."

To help address the difficulties of outsourcing the data center, Marítima tapped Deloitte Consulting (New York) in March 2003. The efforts achieved savings of approximately $15 million through the beginning of 2008, he says. "In 2004, we outsourced all remaining IT infrastructure services," Yamamoto explains.

In the meantime, Yamamoto completed an M.B.A. at Penn State University (University Park, Pa.). "My M.B.A. in international business took me to CIO [in 2004]," he comments. "I decided that a critical success factor was understanding business needs rather than trying to understand what they were asking for."

That understanding led Yamamoto to work on helping business areas define standard processes and make more efficient use of IT solutions. He charted a course that united business process management (BPM) solutions with enterprise content management technology. Yamamoto notes that the carrier had signed a contract for Hyland Software's (Cleveland) OnBase solution in 2003 because of its BPM capabilities and completed a migration to the platform in early 2005.

Before that milestone was reached, according to Yamamoto, he and his team began to define new business processes for underwriting in February 2005. "It took six months of development working with KPMG [New York] and using the ABC methodology, and it took one year to implement it in our 85 branch offices," he relates.