50%
Tweet
Zurich CITO Michael Paravicini built an IT organization to support the carrier's transition to a globally integrated insurance enterprise. 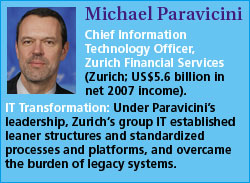 By the end of 2002, Zurich Financial Services had resolved to transform itself from a collection of geographically dispersed businesses into a globally integrated company more efficiently run and better adapted to organic growth. To do that, the Zurich-based insurer needed a truly global IT infrastructure -- and it needed someone who could build it.

When former Commerzbank Bank (Frankfurt) CIO Michael Paravicini took on that challenge on Jan. 1, 2003, as chief information technology officer (CITO), Zurich's IT was a decentralized, locally oriented collection of IT shops managed by about 30 different CIOs. To bring those disparate resources in line with business strategy, Paravicini says, in May 2003 he launched a global IT strategy based on a centralized model designed to bring efficiency improvements via knowledge sharing, resource pooling, and consistent processes and systems across the worldwide Zurich organization.

According to Paravicini, by July 2003 Zurich (US$5.6 billion in net 2007 income) had begun to consolidate several data centers down to just two -- one in Europe and one in North America. Three months later Zurich outsourced voice and data networking to Orange Business Services (Amsterdam), and before the end of the year it outsourced its electronic workplace services -- including hardware, software, printers and related services -- for Europe and North America to IBM (Armonk, N.Y.). In July 2004, the carrier signed a seven-year IT applications development and maintenance outsourcing contract with CSC (Austin, Texas) for $1.3 billion -- the largest such arrangement in the insurance industry's history.

"We had to find an operating model that would provide the business with a more flexible and agile environment," Paravicini says. "And sourcing was the most efficient way to achieve this goal."

By 2006, Zurich's IT organization had stabilized to what Paravicini calls a "steady state," enabling the achievement of significant initiatives, such as the rollout of Zurich Connect, the carrier's single European policy administration and claims platform, which went live for Switzerland, Germany and the U.K. in mid-2007. "It's an excellent example of a cross-border solution that is driving our direct insurance business," Paravicini remarks.