50%
Tweet
The P&C industry is incredibly competitive, with companies big and small fighting for market share. Here are some of the technologies they're using to help differentiate their sales processes.

If there's one word that defines the personal lines auto industry right now, it's "competition." The insurance category is among the most-advertised products in the country, with players big and small trying to distinguish themselves from the crowd and draw market share away from one another. 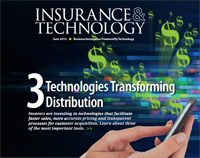 PwC research has found that one in four auto insurance policyholders went through a "shopping" process for new carriers last year, with 44% of those actually switching. And J.D. Power & Associates research indicates that much of that activity took place in some part online: The most recent Insurance Shopping Survey found the number of sales that started and ended online grew to 24% last year.

At the same time, however, abandonment rates for e-commerce forms in insurance and financial services can be as high as 75%, according to research from eGain, a provider of marketing technology. Insurers must provide a differentiated distribution experience in order to attract the most business from these shoppers, says Nationwide (Columbus, Ohio; $484 million in Q1 2013 net income) CMO Matt Jauchius -- and that doesn't mean just throwing a bunch of forms online.

"For very few customers is this category an impulse purchase — that might be three in 10," Jauchius says. "People tend to use mobile devices or the Internet more for prepurchase 'shopping,' less for buying. For buying they switch to a person. When you accumulate more assets, you tend to place more emphasis on trustworthiness and advice."

Technology — especially the three tools we analyze in this report — is shaking up the P&C insurance distribu- tion model, but it's not a means to an end in and of itself, Jauchius and other industry observers say. There's still a major part to be played by agents, underwriters and other people who require these technologies to do their jobs as well as possible. >>

1. Mobile Technology: It's no secret that mobile is fast becoming the channel of choice for consumers, but in terms of how that affects insurance distribution, much is still up in the air.

"The mobile traffic to our website is just exploding -- it's up 25% just from August 2012 to March of this year," Jauchius says. "We've had some time now to identify the top customer transactions -- pay your bill, view your ID card, file a claim -- but where we're taking mobile is fully enabling quoting and binding."

But there are a lot of considerations that go into that, Jauchius continues. Right now much mobile activity on the Nationwide site has been investigative in nature. Plus, consumers might not want to download an app just to get a quick quote.

"We actually have found that more than 80% of auto insurance purchase processes start online, and they often start it on your website. Increasingly, they're accessing that via tablets, where we're doing work to confirm they're probably second-screening: They go on the website after seeing an ad," he explains. "Are you going to get people to download your proprietary app? We're actually prepared for both -- we of course have an app, but by the end of this year we'll have fully responsive [website] design depending on the size of your screen."

The ability to pre-populate forms is growing in importance concurrent with the mobile revolution, adds Jennifer Hanley, senior VP of brand marketing for Nationwide. To prevent cart abandonment while prospects key in answers on the smaller, smoother device screens, insurers have to be able to seed important data in forms.

"I think that every company is going to strive to get to pre-populated fields," Hanley says. "The abandonment rate is usually because you're asking them to do something twice -- that can be a systems issue or it can be process."

Agents are also getting on board with mobile, Hanley and Jauchius say. Nationwide offers a program where the carrier will assist agents in setting up a mobile-optimized website for their agency, so those intermediaries will be able to benefit from the consumer shift.

"Consumers want to meet with an agent face to face when they buy, but the rest of the time they're going to want to get updates and interact with you digitally," Hanley says. "And before they buy, they want to go get ratings and reviews on agents. We offer that as part of our program, and we've found that you're better off having a 2.5 [out of five] rating than nothing at all. It indicates you're willing to listen to customers."

The native mobile app versus mobile Web debate extends to the agent side as well, says Jim DeVito, agency experience manager at Progressive (Mayfield Village, Ohio; $4.4 billion in premium written in Q1 2013). Insurance companies have offered things such as sales collateral in an iPad app to help agents use mobile technology in the sales process -- but in many cases agents "are still sitting at their desks" when writing business, he says.

"We're not going to be in the business of producing apps for agents. We can provide capabilities, but a native app strategy is not easy," DeVito says. "With our For Agents Only site, we made it mobile-capable without changing the fundamental architecture. Down the road I will want that architecture to be fully device-agnostic."