American National Insurance Company has announced the launch of a social business program created through collaboration with Hearsay Social. More than 1,300 agents will use the SaaS platform to engage with clients on Twitter, Facebook, LinkedIn and Google+.

The insurer sought a vendor partnership last year after it had begun establishing an online communication strategy and wanted to expand its efforts. Ultimately the goal is to drive people towards agents and the company website, but social is where customers are now, says Scott Campbell, SVP and CMO at American National.

“It’s exciting for us to see such activity in the marketplace,” says Gary Liu, VP of marketing at Hearsay. He cites a recent LIMRA study, which found that 93% of life insurers used social media programs in 2013. This 55% increase from 2010 reflects how social engagement has become integral to insurers’ marketing strategies.

In partnering with Hearsay, American National hoped to simplify the transition to social for its agent base. “You look at agents, and they make one of two big mistakes,” says Campbell. “Either they don’t do anything in social because they’re afraid of it, or they do too much because they think it’s a silver bullet.”

Campbell explains that with Hearsay’s pre-approved social content and campaigns, new users can successfully leverage social media to engage with consumers without having to become experts. At the same time, the platform provides an appropriate amount of content for actively social agents.

Training agents to use the platform was fairly straightforward, says Campbell. “One of the big reasons we selected Hearsay was, we want to make [social] as intuitive as possible.” Hearsay collaborates with the carrier to train agents on product usage and engaging with current and prospective clients. While some training is done in-person, most is conducted via webinars that are put online for agents to reference. 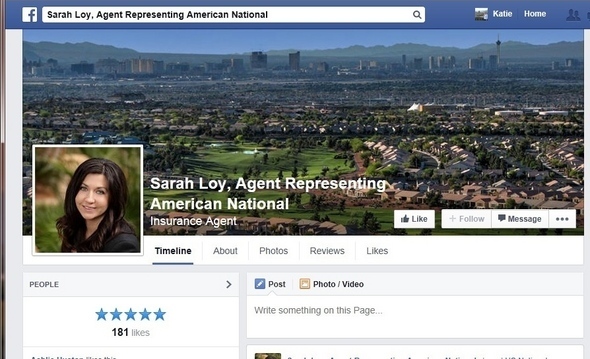 American National launched the Hearsay platform with a pilot unit of 15 to 20 agents in May of this year. This group consisted of both new and veteran social media users, all of whom were enthusiastic about the new tool. This was important, says Campbell, as enthusiastic users would be more likely to communicate feedback. After receiving a positive response, the insurer rolled out Hearsay to its more hesitant agents, who found that it simplified the process of using social media.

While it’s early to give specific examples, Campbell acknowledges that Hearsay has proven useful. Agents especially value the platform’s social signals that notify them of consumers' major life events, which they may not otherwise see.

“When we looked at all the things people post on social media, those are golden bits of data for us,” he says. “People are talking about new jobs, new babies, etc., all things insurers care deeply about.”