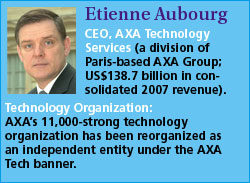 Working with a manufacturing plant manager at Dow Chemical in the late 1980s, Etienne Aubourg, now CEO of AXA Technology Services, tested the principle that what one does not do can be as important as what one does do. "That guy was desperate because he had so many different types of plastics," Aubourg recalls. "I achieved success at that time not by launching new products or applications, but by killing product and simplifying needs."

When Aubourg arrived at Paris-based AXA Group (US$138.7 billion in consolidated 2007 revenue) in 2002 as head of IT and procurement, he found that he faced similar challenges: "How do we clean up the plant -- how do we simplify it, how do we make the life of the plant manager simpler so that ... he can provide the business with what it needs to grow and be successful?" Aubourg relates.

Aubourg's arrival coincided closely with the formation in 2002 of AXA Technology Services (AXA Tech), an independently operated company created to manage global infrastructure for the AXA companies. In parallel with AXA Tech, Aubourg created the Information Systems Strategic Committee (ISSC), which united AXA's technology leaders around the world to decide which technology should be shared across the group.

The committee's challenge, Aubourg says, was to leverage AXA's global scale while affirming a decentralized corporate business model. Thus, he adds, his message to committee members was, "Let's make sure we take advantage of our size without putting at risk what needs to be done for the business on a local basis."

To better pursue that goal, the ISSC instituted groupwide governance standards, starting with project prioritization methodologies. Given AXA's growth ambitions, it was inevitable that IT would face a potentially unmanageable array of initiatives, according to Aubourg. "It was critical that we developed methodologies as part of a business-led exercise to make sure we knew what to do and, more important, what not to do," he says.

The committee also adopted project portfolio management to get a better grasp of both the cost and benefit of IT spending. Further, the ISSC instituted the use of an appropriation request form. "It is a very simple document, but it results in not only having alignment before the project begins, it also establishes a baseline with regard to things such as costs and benefits," Aubourg explains.

Subsequently, in 2003, Aubourg was involved in creating another independent AXA entity, AXA Group Solutions (AGS) -- which he led until taking the job as CEO of AXA Tech in March 2008 -- dedicated to building IT platforms for use by all the global AXA organizations. AGS went on to provide several solutions on an application-service-provider (ASP) model, including a common procurement platform and HR and finance systems.