50%
Tweet
SAP has made a splash with its Hana in-memory database technology, but its utility for insurance will depend on carriers' need for speed.

In-memory computing has made it to the big leagues, in a manner of speaking, with the announcement by the National Basketball Association that it has adopted SAP's Hana in-memory database to let fans analyze NBA statistics. Fans will be able to run queries on every statistic going back to the league's origin in 1946. 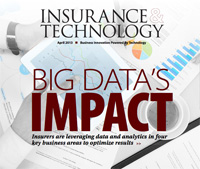 That capability will no doubt give basketball geeks no end of fun, but it remains to be seen whether mainstream companies, including those in the insurance industry, can put in-memory database technology to profitable use.

In-memory technology, which relies on main memory for data storage, is on the rise as memory costs decline and companies look to process ever-larger amounts of data much faster than ever before, says Gartner analyst Donald Feinberg. "The slowest thing you can do on a computer today is read or write to a spinning disc," Feinberg told I&T. "When you look at processing time for an in-memory function, you're talking about orders of magnitude faster -- depending on what you're doing, it could be as much as 1,000 times faster."

SAP has gotten a jump on its competitors with Hana, which has expanded from a real-time analytics play to now powering the full SAP Business Suite of enterprise applications. "Other companies can do this but they haven't yet, so SAP has a big head start," Feinberg says. "We believe that over the next few years you'll see this technology coming out of Oracle, IBM and Microsoft."

Among the benefits of SAP Business Suite on Hana is that it accelerates routine reporting functions -- customers can run end-of-period financial reports in seconds or minutes instead of tying up a database with a batch run for hours, according to Ovum analysts Tony Baer, Madan Sheina, Nicole Engelbert, Carter Lusher and Warren Wilson, who published a note on Hana in January. But faster processing speed is the least of Hana's benefits, the Ovum analysts say.

"The in-memory architecture allows data views to be generated on-the-fly, a benefit that not only reduces database footprint and storage requirements, but also potentially simplifies the modeling and deployment of data and the design of analytics or other complementary applications that run atop Business Suite," their note states. "Hana's in-memory architecture also allows analytics to be embedded with transaction processing, enabling companies to become more agile. For instance, SAP customer John Deere achieved positive ROI on its Hana investment based solely on the benefits of implementing it for pricing optimization."

Gartner's Feinberg says Oracle's Exadata database appliance has been misleadingly touted as in-memory when in fact the product uses memory off the server board rather than on. Oracle has come around to calling Exadata's capability "database in memory," rather than in-memory database. The distinction is worth noting because of the significant difference in speed, Feinberg insists, but it may still leave companies wondering whether it matters. (Feinberg hastens to add that Oracle's Exalytics appliance uses true in-memory capabilities and competes with Hana as a standalone analytics application, but Oracle Business Suite doesn't use in-memory computing.)

"The question to a corporation is: If I'm running Exadata today, will it be fast enough that I won't need to convert to Hana?" Feinberg says. "In many situations the answer will be yes."

Conlon sees in-memory computing giving insurers three major advantages. "First, they can churn through greater amounts of information to derive insights quicker," she says. "There is also the potential to make better predictive models and to drive real-time business intelligence."

For example, Conlon sees the technology helping to drive underwriting earlier in the insurance life cycle. "Instead of underwriting occurring after a submission," she says, "some companies are performing abridged processes, whereby they're launching marketing campaigns and reaching out to certain prospects -- perhaps in certain geographies, performing a kind of pre-underwriting and understanding that they want that risk before they attempt to approach the prospect. In-memory technology will enable the injection of more information into that process, from social media, data bureau sources, etc., and develop a more comprehensive understanding of the risk and the prospect."

Gartner's Feinberg cites the examples of handling, analyzing costs and detecting fraud on insurance claims. "Ultimately, it's a matter of whether there's a business benefit for getting something that may take 30 minutes down to one minute," he says. "That's the question you have to ask."