50%
Tweet
The fraternal benefit society will build its communications strategy and client relationships through a partnership with Hearsay Social.

Fraternal benefit organization Woodmen of the World Life Insurance Society has announced a partnership with Hearsay Social to improve its social business strategy and better engage with its life and annuity customers. The updated system allows the society to leverage social media while remaining compliant with company policies.

In establishing its strategy, the carrier cited a September 2013 study from the Pew Research Internet Project shows that about three-quarters of adults use social networking sites. Woodmen of the World attempted to meet the growing demand for online interaction with an older social business platform, but found it made client interaction difficult.

Cris Hay-Merchant, director of marketing and communications at Woodmen of the World, explains that its previous social business solution did not facilitate customer engagement or allow the delivery of content to representatives. Compliance was another hurdle; representatives were encouraged to discuss local Woodmen of the World chapters and events but forbidden from mentioning products or services.

“One of our challenges was being able to deliver pre-approved client content out to our representatives,” says Hay-Merchant. “It was equally important that they were compliant in their states.” Representatives are most heavily based in the southeastern United States but have offices across the country.

Hay-Merchant explains that Hearsay was chosen because of its user-friendly interface, improved customer engagement and ease of achieving compliance. Representatives can choose to post information from a pre-approved content library or submit their own content to be approved by their home office. They may also use Hearsay’s capabilities to receive real-time updates on their social connections and reach out with appropriate information. 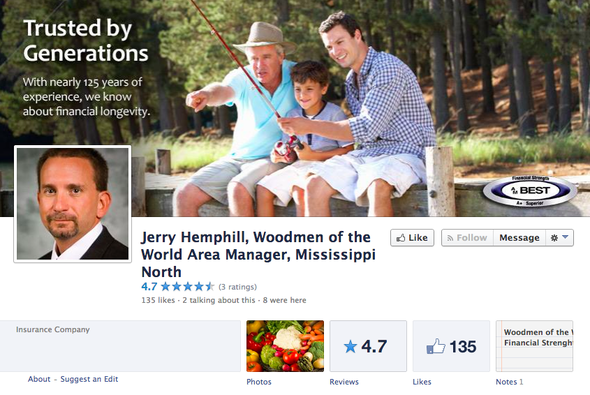 Woodmen of the World agent page

“I think what’s exciting for a lot of our customers is the ability to engage the right person at the right time with the right message,” says Gary Liu, VP of marketing at Hearsay.

Woodmen of the World began working with Hearsay Social in November 2013 and launched the program with 50 to 75 representatives. Since the program’s launch, 220 agents have gone live on Hearsay Social. Each undergoes a short orientation, which involves participation in two webinars that review profile creation, social media guidelines and best practices, and FINRA regulations.

Woodmen of the World stays updated on its progress through quarterly business reviews. Each involves a discussion with Hearsay about key metrics regarding growth and engagement, best practices and identification of successful producers. So far, it has been successful. The society’s representatives generated close to 28,000 customer alerts based on personal life events in the first quarter.

“Social media just makes so much sense,” says Hay-Merchant. “It’s a genuine, authentic way for our reps to connect with the people in their communities.”

The companies have also created a video about their partnership: